Idk, but if you look at it on a sat, it's mostly barren desert. There is very little green areas.

I would love to go visit, even the desert areas, their wildlife is awesome. I love diving. The great barrier reef alone would make the journey worth it for me.

originally posted by: introvert
a reply to: Christosterone

I've never understood the fascination some of you folks have with the Hollywood-types, while at the same time claiming not to care about them whatsoever.

Well, actually I do. It all goes back to the early 90's and Rush Limbaugh. Funny how the propaganda is still working.

We aren't fascinated we are disgusted by their big liberal mouths spewing and whining about how hard their lives are because Trump is President.

Finally! A liberal that promised to move out of the country is actually going to do it.

Of course he's moving to another white pop country. Probably because he's racist.

Safe place? Walled off compound and security guards around the clock.

if you had your wish you would be left with a bunch of gun toting, confederate flag waving, nationalist/isolationist, cold hearted deplorables...oh and i'm sure there would be a few good people out of them..

i'm not saying that donald trumps policies would be enough for me to up and move but if i had the money why not live abroad? i say good for him for sticking to his ideals.

Finally! A liberal that promised to move out of the country is actually going to do it.

Of course he's moving to another white pop country. Probably because he's racist.


I wished he moved to one of the s-hole countries and owned his liberal hypocrisy....
Matt Damon would love Somalia...they have beautiful beaches

Daily Mail
Those reports are both false.

The actor's publicist denied both claims, telling DailyMail.com: 'Matt has visited Australia several times recently, but he has not bought a house there nor is he moving there.'


Gotta love those unnamed sources. They're never a problem when they say what you want.

I read 4 pages of mostly "Hate Matt Damon" and now his publicist says it's not true.

Is it possible his publicist had a convo with Matt and told him it would be career suicide in the US if he actually did this?

Personally, I wish he would move and take his big talking liberal ego with him-and his friend Ben and go on a walk about-where all the most venomous snakes reside.

nah it is all fake mate, nothing in that region but empty ocean, Australia is a hoax. Do not fall for the tourism media it is a trap.

a reply to: Annee

Sorry Annee we are FULL!

I agree Australia is hands down a better place to live let alone raise a family than america. Queensland is amazing.


Ok he is full of crap. The main reason I say this is because most of us are required to stay here for one reason of another and put up with who and what the hell ever is in political power. Never mind that the people should be.

And besides if you or me moved down under no one would give a s**t even though its folks like me and you the make the world go around.....not actors.


These poor actor saps like him and Deniro playing the actor vortex of characters played superimposed upon the person......in other words a dam tool sort in the deep lib tool box of dolts. 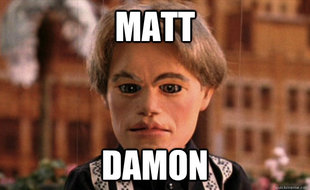 Well someone was going to eventually.


Of course he's moving to another white pop country. Probably because he's racist.


If he had balls he would move to South Africa...lol

originally posted by: conspiracy nut
i'm not saying that donald trumps policies would be enough for me to up and move but if i had the money why not live abroad? i say good for him for sticking to his ideals.


If I had the dough, I'd go live in the south of France next to Johnny Depp. I hear it's very nice.

posted on Mar, 15 2018 @ 06:07 PM
link
I personally have always liked Mat. He has been spewing liberal nonsense,.. (considering his sources for reference and bearing)..for sometime now. But he has always seemed trainable. I wouldn't rule him out, just yet. Australia may be a good place for him to grow up.


Yea give it some time and they will find him way out back, hanging with the deep wood native, running around naked under the influence of old school hallucinogenics.