This led me to festivals with names like Qlimax, Q-BASE and our old friend Tomorrowland.

Definitely not the first time the festival circuit had popped up here.

We work for you.

We listen to you.

You pushed the IBOR and immediately POTUS began to comment/take action re: social media.

I'm catching up, but wanted to throw this out there with regard to the magic squares. I'm not going to pretend to comprehend how that system works, because I cannot figure it out at all. Someone would have to physically show me how to do it.

I am just curious if the words y'all are coming up with are anagrams or not. Because if all those letters are simply one message, there are a whole lot of possibilities. In the first square alone, the word "TARMAC" is there, for example.

You have way more than you know.

Roger that. I'll work on it. I guess this Kim/Trump meet has been in the works for a while.

With all this Peace Mongering going on, what is the Military Industry Complex going to do? Beat there swords into plowshares?

I would go for that. Best POTUS ever. 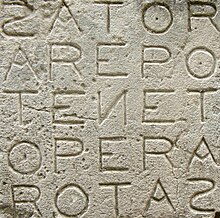 Dashed thank you so much for all the hard work do with keeping these going. I have flagged every thread and gave stars to all ur posts for the index. Thank you to everyone else who keen sense of digging has shined light in some pretty dark places. I love these threads.

Is this going to be a total Alice and Robert thread?

It’s a major aspect of all of this we haven’t covered. I wonder if @snowden is in that Cadillac.

"We can grab you whenever we want"

originally posted by: dashen
Carry on Q-sters .
Only up to 300 so far

Any way you can get the mods to move comments made before you finished posting to after you've got it all up?

Agreed. But will anyone pay attention? He is turning his nose up to the NWO. That seems to be their baby.

What's the significance of this hand signal made by the President, that Q provided a link to here, in this brief video clip: ytcropper.com...

I watched as the Lamb opened the first of the seven seals. Then I heard one of the four living creatures say in a voice like thunder, “Come!” 2 I looked, and there before me was a white horse! Its rider held a bow, and he was given a crown, and he rode out as a conqueror bent on conquest.

Who is Donald Trump? Is he the White Rider?

We've already touched on how Israel views him as a meshiach, a type of messiah (not THE Messiah), akin to Cyrus and there are Christians who put him in this category.

The white horseman has been given a crown, a garland of victory, and a bow but no reference to arrows, and he rides out to conquer. If Trump rides over Iran like he has dealt with North Korea and then pulls off a solution to the Israeli/Palestinian problem, would this characterization of him be wrong?

And what follows after the white rider? The red ...

What's the significance of this hand signal made by the President, that Q provided a link to here, in this brief video clip: ytcropper.com... Blowup of the billboard in the background of #893.

Maybe someone else has photoshop and can play with it more.

Roleplaying Troll I think is what he meant.