Good Lord, what is wrong with these people!!
These are the sort of people we probably used to institutionalize many years ago.

These people are sick!

Which politico was it who was caught up in a scandal because he was in a picture where he was in a bear costume ... like a creepy one? I want to say Yee, but I don't think it was him. I'm not turning that photo up, but I remember it. That pol was in his office or something.

Wrong on several levels there.

As a parent, even though my kid wasn't talking, I *knew* something wasn't right when he was being picked on at school earlier this year.

You can't tell me these kids' parents didn't *know* at some level there wasn't something going on, even if they didn't know exactly what. They had to be able to tell there was something not quite right somehow.

I'll bet you the parents were more interested in them being on the team than they were.

Which politico was it who was caught up in a scandal because he was in a picture where he was in a bear costume ... like a creepy one? I want to say Yee, but I don't think it was him. I'm not turning that photo up, but I remember it. That pol was in his office or something.


That's not a tiger suit, Ket. That's a Tigger suit. As in Disney. Which, unbelievably, makes it even creepier.

Also, last night I posted about a strange photo on the Standard Hotel site that shows a couple in bed, only the guy is wearing a huge bear head. Like the kind that belongs to a heavy costume, like mascots wear.

These people are FREAKS.

I'll bet you the parents were more interested in them being on the team than they were.

You'd be betting right, at least about some of them. These people are our neighbors, coworkers, even our friends. Hiding in plain sight, always.

originally posted by: WhatTheory
You would think the parents would have noticed something.

It is very important to remember that these people really do offer up their own children. That is an absolute, 100% fact. Fear is always the most powerful motivator.

For every truly innocent parent out there with kids involved in this horror that genuinely has no idea what is happening, there is at least one more who is directly involved and utterly complicit.

originally posted by: WhatTheory
You would think the parents would have noticed something.

It really depends on the girl.

Some athletes are incredibly driven, enough to hide something like this at all costs, but there aren't as many of those as you might think.

True, what a lot of people don't understand about things like CTE and the NFL is that a lot of the players there are incredibly driven, enough that they'll run any risk to compete -- including the risk of brain injury or other injuries. Something like this wouldn't be a lot different, but not all the athletes are as all-in.

And there are some parents who will push kids, too. I knew a girl who was on our track team when I was coming up. She and I both went major college, but her parents pushed her every step of the way. I'm not sure if she would have chosen it for herself without them pushing it.

But even with the girls not saying anything, with many of them, there ought to have been signs that something was off.

Oh no #...I didn't even make that connection. Thank you. I didn't really get involved in the PG threads too much because at the time I wasn't really able to handle it emotionally, and so my knowledge of pizza related pedophilia terms is rather limited. But they do love to dress up in costumes.

With me it was clowns.

posted on Mar, 1 2018 @ 06:02 PM
link
Something that keeps nagging at the back
of my thoughts is that all of the news articles
on the Russian hacking always refer to the DNC,
Podesta, and The Clinton Campaign.

Yet, if this Russia investigation is actually
about the legalities of the hacking, and
the espionage, and the cyber war then there
is something strange going on with Mueller
and just about every news article written
in the last year.

What I find suspicious is that in the early
reporting of the Russian hacking, reports
were that Republicans were also hacked.
Bear with me for a minute here....

A quick search of "Russia Hacking Republicans 2016"
turns up several articles by NYT, CNN, and just
about all msm sources. Several quoted Comey
as having said the Republicans were hacked.

The excuse given for why we do not hear
anything about this is that "yes the R's
were hacked but no information was released".

But...since The Russia investigation was started
as a counterintel investigation, and continues
as that if there is a shred of integrity in it
there will eventually be charges relating to
hacking of both parties, not just the D's.

Maybe this is just the media focus on the D's,
Podesta, and Clinton as the victims to try
and legitimize Trump's presidency, however
if Mueller does not ever bring the hacking
of both parties up in charges, then I will
contend the entire SC is nothing more
than a way to "Get Trumo" as any counterintel
Investigation worth it's salt would produce
charges from hacking both parties, because
we all know that it would be the act
itself the real crime.

To note: Clinton has never mentioned
the hacking in the real sense, only
as a victim. Her lack of patriotic response
is noted, same with Podesta and every
other Democrat out there. 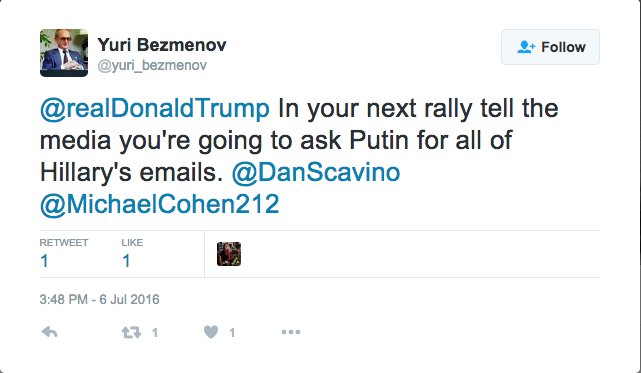 Well, he looks familiar. Where have I seen him? I seem to recall his name coming up in discussions about the mass shooting in Las Vegas and possible connections to Stephen Paddock.

It wouldn't surprise me if they knew each other from the angle of gun smuggling.

TextThe Tor Project, a private non-profit that underpins the dark web and enjoys cult status among privacy activists, is almost 100% funded by the US government. In the process of writing my book Surveillance Valley, I was able to obtain via FOIA roughly 2,500 pages of correspondence — including strategy and contracts and budgets and status updates — between the Tor Project and its main funder, a CIA spinoff now known as the Broadcasting Board of Governors (BBG). These files show incredible cooperation between Tor and the regime change wing of the US government. The files are released to the public here. —Yasha Levine

For those who are interested I memorialized this
with a thread so hope stays alive. Not holding
my breath, but this is a good sign.

Canadian miner Uranium One is controlled by ARMZ, which in turn is controlled by State Atomic Energy (or Rosatom), the Russian utility that controls 17% of the world’s nuclear fuel production.

Uranium One operates 3 mines in Kazakhstan, with an additional development project in the country, and various exploration projects and an In Situ Leach mine in the United States.

"In Situ Leach mine"


In-situ leaching (ISL), also called in-situ recovery (ISR) or solution mining, is a mining process used to recover minerals such as copper and uranium through boreholes drilled into a deposit, in situ. In situ leach works by artificially dissolving minerals occurring naturally in a solid state. For recovery of material occurring naturally in solution, see: Brine mining.