Just days after SpaceX performed a successful static fire of its Falcon Heavy rocket, Elon Musk says that the company is planning to launch the rocket for the first time on Tuesday, February 6th from Cape Kennedy in Florida. SpaceX originally intended to launch the rocket in 2013 or 2014, but has continually pushed the date back. Now that the rocket has successfully completed its tests, the first launch is within sight.

I feel like a child I am so excited. We have all been waiting years for this and now we have a set date though that is always subject to change. This will be an historic event and all the world will be watching, some wanting this to succeed others not so much. I personally hope to see a astounding successful launch. The race is on and SpaceX is leading the race with many others at a close second. Saying Blue Origin is not far behind would be a understatement. Even if the launch succeeded and the three boosters fail I still would view this as a huge step forward. I look forward to reading my fellow ATS members opinion about the subject! And a question I would like to ask is if any of you are going to view the launch or are even close enough to get a good picture or even video please let ATS see it first.

Should be quite a show...

Thank you for the fix, idk what I am doing wrong. Maybe one of these days I will get it right.

posted on Jan, 27 2018 @ 09:06 PM
link
It makes me giddy. I've always regretted never being present for a Saturn V launch. I'm sure that shuttle launches were fun, but the Saturn V stands alone in it's class. The F1 engine was an amazing piece of technology, and we may never see it's equivalent again. If that ends up being the case, it would be unfortunate.

The Apollo 11 landing was a couple of weeks before my 4th birthday, so I wasn't really old enough to appreciate the Apollo program, and despised the shuttle program, which to me seemed like nothing more than financial welfare for North American/Rockwell after the Apollo program was gutted and the Apollo Applications Program turned into Skylab. It's one of the greatest mistakes this country has ever made, and pisses me off to this very day.

Just from what I can recall, I'm pretty sure that the Saturn booster series, the I, the IB, and the V, never had a single catastrophic booster failure in flight. Considering the systems complexity, and the physical forces involved, is ASTOUNDING. And for an engineer, very, very humbling. They designed these things with slide-rules and elbow grease, not computers and automation. Those guys were really, really good. KInda like scratch-building a Rolls-Royce Merlin engine, with nothing but a Dremel.

The F9 Heavy is a big step back in the right direction, with very tangible, concrete advances in thrust and payload capacity. It and some of the other upcoming boosters are exciting, because I had come to the conclusion that I would never have an opportunity to see a machine like the Saturn V in my lifetime.

As of now, it seems that may not be the case. To me, it's just frakking AWESOME.

originally posted by: Allaroundyou
I look forward to reading my fellow ATS members opinion about the subject!


Assuming the boosters land successfully, I can't wait to deal with those claiming the landings are a hoax.


And a question I would like to ask is if any of you are going to view the launch or are even close enough to get a good picture or even video please let ATS see it first.


I'll be filming it and tracking it at high magnification with my telescope. Trying to get an elevated position to get a better view of the launch, but it seems like they may not let the telescope in (if not, I'll stick to ground level with the telescope). Still working on arrangements for it.

originally posted by: Agit8dChop
whats the chances this is a 2nd attempt to get ''whatever'' up there... we tried recently with a spacex rocket and depending what you believe, it failed...

There's nothing sudden about it, if you've been paying attention you know that this Falcon Heavy demonstration flight has been in the works a lot longer then the Zuma mission was even on the flight manifest. And a Falcon Heavy would be overkill for a payload that could be launched on a Falcon 9. And if it was a failure due to the payload adapter or the payload itself, there hasn't even been enough time to perform a full investigation and analysis of said failure, let alone build a new payload or refit an engineering spare to replace it.

posted on Feb, 1 2018 @ 03:34 AM
link
Sorry if it's the wrong thread to post on but its Falcon 9 related and I didn't want to start a new thread. I missed the launch yesterday but viewed the play back of the launch. I've been stuck at how two camera angles are different when the 2nd stage separates from the 1st. I see this camera angles every time a spaceX rocket launches and cannot work out how the images are captured. I'll explain with these screen shots Then the camera angle flips but the earth is in a completely different angle the 2nd stage looks like it's heading in the opposite direction yet the booster is in the same position. If it was a reversed camera wouldn't the booster also be facing a different way? originally posted by: ThePeaceMaker
If it was a reversed camera wouldn't the booster also be facing a different way?

posted on Feb, 1 2018 @ 09:46 AM
link
a reply to: RTLSLZ1
Thanks I think I understand what you are saying I guess it's a bit of an optical illusion it still messes with my head though

posted on Feb, 1 2018 @ 12:45 PM
link
The launch that had to happen before the heavy could launch was last night. They should be clear now for the 6th.

posted on Feb, 1 2018 @ 12:59 PM
link
One issue that has bothered some people is that they went through the motions of "landing" the booster yesterday, complete with landing burns and landing leg deployment, only to have the booster enter the water. You can hear the call-outs in the video of the launch. Yet they did not recover the booster, so why did they do this? The answer lies in the launch schedule. The drone recovery ship is likely already on station. If they had recovered this booster, which was on its second flight, the drone ship would not have time to make it back to port, unload the booster, and make it back on station for the Falcon Heavy flight. In other words, SpaceX was forced to choose which booster they wanted to recover because they couldn't recover both. Why would they choose the Falcon Heavy booster over this one? Two reasons. First, the central booster of Falcon Heavy is a new booster. The two side boosters have both flown before. They had a choice to recover a booster that had flown twice or one that will have flown once. They chose the newer booster. Second, the publicity value of recovering all three boosters from the Falcon Heavy flight is immense. They'll film all three landings, of course, and it will be a huge rush for everyone who sees it and a great accomplishment for SpaceX.

originally posted by: schuyler
One issue that has bothered some people is that they went through the motions of "landing" the booster yesterday, complete with landing burns and landing leg deployment, only to have the booster enter the water. You can hear the call-outs in the video of the launch. Yet they did not recover the booster, so why did they do this? The answer lies in the launch schedule. The drone recovery ship is likely already on station. If they had recovered this booster, which was on its second flight, the drone ship would not have time to make it back to port, unload the booster, and make it back on station for the Falcon Heavy flight.


While it's true that they couldn't have turned the ASDS around fast enough for Heavy, they were planning to expend this rocket even before that schedule had been decided. It was an old Block 3 core that had already flown once before, and not only is obsolete compared to the Block 4 cores but they're all going to be made obsolete later this year by the Block 5 core. Block 5 is designed to greatly ease and speed up vehicle turn around for re-use. It has enhanced thermal protection and retractable legs that don't have to be physically removed every time they land in order to haul the booster back to a hangar. Block 3 cores just aren't worth keeping around, and neither are the old aluminum grid fins or non-retractable legs. The current policy seems to be 2 flights for Block 3, the second being an expendable flight even if it could have been recovered. The GovSat-1 landing was just an opportunity to test a risky high-G 3 engine landing to minimize gravity losses for cases where fuel margins are even tighter.

Here is my cell phone vid of GovSat from the causeway.

I got there last minute, due to some GPS jamming. Also had 2 dog leashes wrapped around my legs, and strangers walking up to me and asking about the launch while it was already happening.

I'm located over an hour north of KSC, and made the trip down mostly to scope out some spots to watch the Falcon Heavy launch from.

I'd buy a ticket to the center for $75 from the rocket garden, but if it's cloudy you won't see much and it'll take ALL day.

Starman will be at the wheel of the Tesla car. 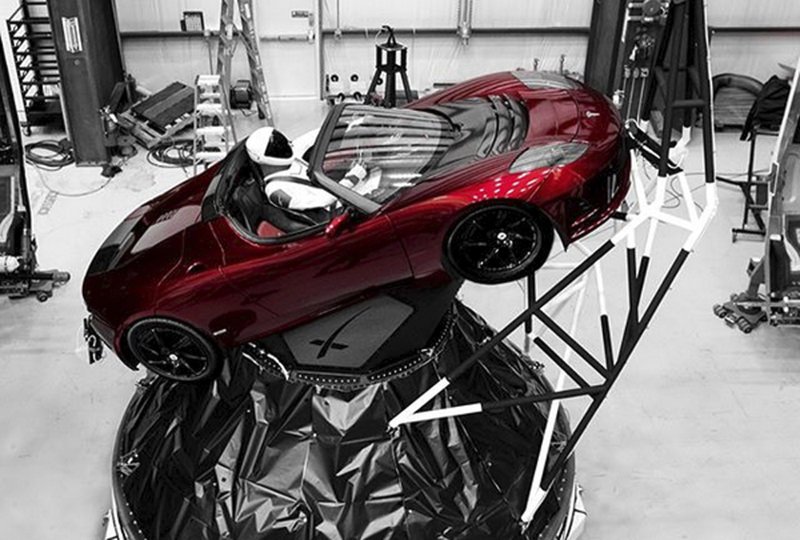 posted on Feb, 5 2018 @ 02:44 PM
link
a reply to: EchoesInTime
Wow watching that animation of how the launch is meant to go looks amazing. Are they really going to attempt to land all 3 boosters that's going to be amazing.

Yep. They confirmed that they are going to attempt to land all three.

originally posted by: Zaphod58
a reply to: ThePeaceMaker

Yep. They confirmed that they are going to attempt to land all three.

That's actually amazing. I've set my alarm for the launch as I should be at home to watch it, gonna play it through my flat screen to for extra wow factor