I never understood this whole "appeal to the youth" part of Tom's plan.

I don't know how many young kids listen to Blink-182 still.

He is as old as Elvis was when he died.

originally posted by: coursecatalog
He is as old as Elvis was when he died.

How proud TTSA must be of their ageing punk idol, who will only appeal to ageing US punk fans.

So what's the point of him?

originally posted by: coursecatalog
I never understood this whole "appeal to the youth" part of Tom's plan.

That's the one bit of it that I have understood so far. It's similar to the problem that the US Army is facing with recruitment drives.

Those cold shoulders were easy to ignore when the jobless rate was above 6 percent and the Army’s most dependable recruiter, Sgt. Hard Times, was driving high school graduates to enlist. But now, unemployment has fallen to 50-year lows.

“Whenever that happens, the Army faces recruiting challenges,” said David R. Segal, a sociologist who advises the military on recruiting. “But they have always doubled down on areas where they know they can get results. This is a 180-degree turn.”

The Army has begun redirecting its marketing toward digital-native urbanites and suburbanites who are eager for excitement. Out went the Army’s sponsorship of a drag-racing team; in are teams of soldiers who compete in mixed martial arts, CrossFit, and competitive video gaming, or e-sports.

Ads on network sports broadcasts are being scaled back in favor of targeted ads on Facebook and Twitch, Amazon’s live-streaming gaming platform. Recruiters will soon be required, not just encouraged, to post on Instagram.

“Kids aren’t watching network TV any more,” General Muth said. “They are not at the mall. And they don’t answer calls from numbers they don’t know. But we know they want to serve their community, so we have to start that conversation with them.”

TTSA are offering to bridge similar gaps, much like the tv series NCIS does for Lockheed Martin, instilling the mind set that in the fight against "evil" the ends justify the means and "rights" should be thrown out the window. TTSA's heart could be in the right place, or they could be offering a hypodermic syringe into the hearts and minds of our children to the highest bidder.
edit on 22-2-2019 by KilgoreTrout because: didn't explain myself

originally posted by: Willtell
Raising more money for what?
What have they done with the money they’ve already raised?

TTSA made a net loss of $5.7m of which $4.8m was 'stock based compensation' that goes to its team of directors and significant employees.

$60k was paid to the Hoff and his Eartech company for preparing analysis and papers on the magic metamaterials and beamed energy propulsion.

As for Zondo's clothing budget. Well he refused to disclothe it.....(sorry I had a lisp when I wrote that!).

They are also seeking a CEO

In particular, we are looking for a Chief Executive Officer at TTS AAS

Anyone fancy a job out in the California sun?

I am far too busy with my own venture "To The Beef Academy of Farts & Neuroscience" (TTBAFN) to consider such a role unfortunately MM. I just have that magnetic attraction to cows...

I do wonder what the other group(s) are doing though and what their adventures into the cave of brahma have come to, if anything....probably stopped off at the temple of set along the way....well, some of them at least.

Thanks for that. I don’t know any of these people and wonder what they do


I still don’t see anything they have produced of any substantial value as regards UFO disclosure, exposure, revelations, and only speculations from the books. Also, not even hypothesis, theories, possibilities, events, NOTHING.
As for Zondos clothing budget, I would think that is the only savings they have made.

its a way to attract newer UFO cultists, the old guard is getting too old

posted on Feb, 24 2019 @ 08:51 AM
link
Over at Keith Basterfield’s blog there’s a lengthy post detailing some bunk ‘anti-gravity’ research the DIA funded...AAWSAP and ATS’s very own bigfatfurrytexan are mentioned in reference to running down — to no avail— the primary researcher’s location back in 2008.

Bunk Research, AAWSAP and bigfatfurrytexan Running Down a Physicist


It’s a good Sunday read, if nothing else.

posted on Feb, 24 2019 @ 09:52 AM
link
i think we should pay attention to an odd and forgotten UFO event that quite possibly bears relation to TTSA:
the UMMO affair
mysteriousuniverse.org...

posted on Feb, 26 2019 @ 07:10 AM
link
Although not directly linked with the TTSA franchise (or whatever it is?) various personnel that have sat or still sit on the TTSA bus have been involved in a bit of banter with Jack Brewer over the alleged pulling of the second part of Whitley Streiber's interview with Diana Pasulka due to security reasons. 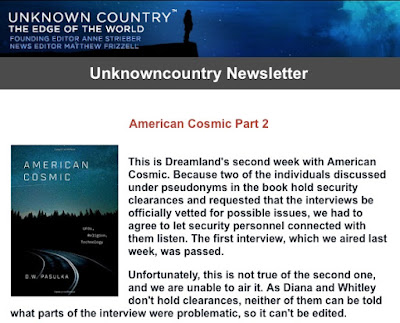 ...The following statement was provided by Strieber:

I don’t know what security personnel were involved. We were asked to let the interview be listened to by two of the people we discussed in it. Both of these people are mentioned anonymously in Diana‘s book. I therefore sent them a copy of it. We were told that "security" didn’t want the second interview aired. As we had agreed before hand to do this, we complied. I don’t know anything more than this.


"I respect Whitley but have no comments," Walsh Pasulka replied in part to an email seeking clarification.

The implication is Walsh Pasulka's sources, who reportedly were issued security clearances, acted as liaisons to "security personnel," who nixed the second part of the interview. Similar reports surfaced surrounding Walsh Pasulka's previous interviews. The circumstances seem rather irregular and many questions remain....

An email was sent to [Gary] Nolan seeking comment on the possibility he is "James". He was also asked about the alleged "security personnel" who reportedly reviewed the Dreamland podcast interview.

"I have no interest in commenting on rumors," Nolan replied, adding a smiley emoji.

"But I do support the work you and others do. It’s a hard road we all have taken to find the truth."

... An argument could be made that those involved have responsibilities to clarify the circumstances and minimize sensational speculation. That might particularly be true within a genre which has historically spread tales long on drama and short on facts.... Unfortunately, it is not currently entirely clear whether they are fighting it or complicit in its cultivation.

Make of that all what you will...

I listened to the first and second part of the podcast last night. Whilst the first part was just Pasulka pretty much going over the same thing again as she has done in the first part. The second was just Whitley going over what he took from the book etc.

Without LMH spelling it out on their radio show a month or so back, it was still easy to pick up who "Tyler" was from what Pasulka said in this interview anyway. She said he had worked on multiple NASA projects with the space shuttle and had helped people walk again from spinal surgery and hip replacements. She did hint that these "procedures" were possible due to the materials that had been recovered from these "donation sites" ; which is a new term I haven't heard before.

I don't mind Whitley to be honest, again I think he is as mad as a box of frogs but at least his own narrative hasn't changed that much over the years. He knows that people think he is crazy, I would rather have a discussion with someone who thinks I think they are crazy than someone who pretends not to be but is! :/

In terms of "they discussed classified things" - well I call shenanigans on that. If there was anything that two people who didn't have security clearances that discussed REAL classified materials, the world would crashing down on them. NOT because of what they are discussing, but the origins of how they knew such material. Certain alphabet agencies would want to know their sources and those source would have their worlds caved in as well....not to mention a very strong debrief and a prison trip or two!

This is something that people in this field ignore consistently, there are not any real whistle blowers in terms of classfied materials. When there is, they have to take a nice life long holiday to Russia, aka Snowden etc.

I would say that it was a game that was played to strengthen the narrative presented in "American Cosmic" to make it appear more like its the real deal.

The "invisibles" more like a load of old bollocks...

....I would say that it was a game that was played to strengthen the narrative presented in "American Cosmic" to make it appear more like its the real deal.

The "invisibles" more like a load of old bollocks...

I have never really wanted to read that book because it's subject matter seems very muddled to me. I really don't get the link Lady Di is trying to portray of a bunch of technocrats who believe they have proof of ET and a rather obsure link to Catholicism.

If you have proof of ET you show your proof and it has to be absolute. Otherwise you have nothing. So far we've seen nothing. Although I can see the link to Catholics. They have nothing in the way of proof either.

I’d assume that this and perhaps the putting back of the interview of Nolan with John Burroughs will put all of this close to the big reveal of the TTSA NDA covered 9 (or is it 12?) part documentary?

No CTJ, its a straight to DVD job I think; There's supposedly a conference coming up in March where more will be revealed.......Give it six more long years. Or maybe TTSA will have gone bust well before then?

©To the Stars Academy of Announcements and Statements (TTS AAS)

Well, we've got Nolan / Vallee's film coming as well. With 9-12 episodes of the TTSA A+E series, I'd expect it to be announced in March, and to start broadcasting April or May (an unusual strategy, due to the NDA nature of the project). We can probably expect it to be done be late summer. I'm assuming that is when the second round of fund raising will end and we'll get another hiatus and promise of "big revelations" for 2020.

It would be interesting to see a list of claims made by TTSA members, and most specifically the claims of the type of things that were supposed to be announced at the start of the year and now March / April.

You telling me Vallee is part of TTSA. I think he wrote the forward to Levenda’s book.