Christie, family soak up sun on N.J. beach he closed to public

The guy's size is totally incidental to his bad behaviour. Let's not get ironic in calling him out.

I heard he closed 3 bridges too, they had to get to the beach somehow....

Imagine if he gets in the water, we could have a national emergency flood or tidal wave watch!

We could have another Katrina

originally posted by: Willtell
This is not funny folks…

Imagine if he gets in the water, we could have a national emergency flood or tidal wave watch!

We could have another Katrina


Raised the oceans by 3 feet... a walking, breathing global warming...

Nobody reads the links on Drudge Report? Obvious the source of the op.

originally posted by: Yourmomsentme
Seriously this thread gets 30 flags?!

Nobody reads the links on Drudge Report? Obvious the source of the op.

Not sure if you have noticed but ATS is a chat/discussion site. 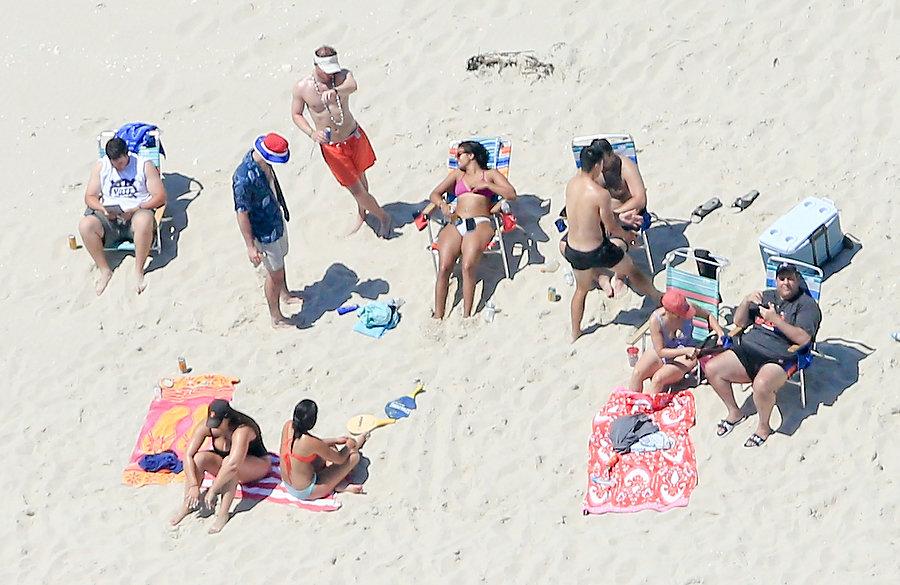 Someone's got some pretty impressive cameras to get that kind of close-up resolution at a distance. As much as I loathe Christie, this thing smells like some kind of political set-up.

www.nj.com...
"It was experience and good instincts that led photographer Andy Mills to charter a flight over that same deserted beach."

"Good instincts?" Or maybe someone tipped off the media....

It's CALLED a DJI Phantom DRONE.

You can GET one at your local BEST BUY...

They shoot 4k. That's a LOT of pixels. Great for zooming in close.

OKAY...so the photog charted a FLIGHT...STILL...


originally posted by: underpass61
Geez louise this is about on the same level as the "two scoops" ridiculousness. So the beach is closed, what do you think that means? Locked gates? Fences? Armed guards?
THIS is what it means - NOBODY is going to stop you from using the beach. There are no funds for lifeguards so swim at your own risk. That's all - PERIOD. You lefties are pathetic.


Many of us on the right are equally disgusted by his actions and attitude.

That may be true but trying to paint this as some elitist d#ck move is just moronic. Unless it's a private beach NO ONE will stop you from using it, you're responsible for your own safety that is all. Most beach closures in my area involve toxic runoff contaminating the water in wintertime so going in would be foolish. Still no cop will stop you from having a picnic or getting a tan, or even swimming it's your call. Especially on a state beach.

Not true. State parks, including beaches, that are closed during government shutdowns are CLOSED. That means the general public risks tickets for trespassing, same as they would if they jumped a gate at a local park or zoo after the facility is closed.


Like when the dems kicked the vets in wheelchairs out of their own monuments?

originally posted by: ventian
He said "I didn't get any sun".

As if the sun would miss a target that big.


He should wear solar panels. The Republican governor said he ordered all closed state parks to reopen for the Fourth of July. State parks and beaches had been closed to the public, though Christie spent Sunday on a beach with his family.

Christie said the state government will open on July 5, after the holiday and that state workers will get paid a holiday at his request.""


Carrying that chair, while pulling the cooler across the sand, is good for weight-loss and cardio conditioning.

Hopefully, the cooler contained healthy food and beverages. (not likely though)

Spoken as a member of the unenlightened. 😢