In case you are wondering, this isn't cool.

He has the freedom to put anything he chooses on his truck and this appears to be destruction of his personal property.


Before I say anything else on this subject, I wanted to say this to you:

posted on Jun, 26 2017 @ 09:14 AM
link
I loved watching the dukes of hazard .
Loved that car and if i bought one would love to paint it just like the show .
the flag is more of a rebel ideal then anything else .
but even that is over stated it just looks cool and i am 51 .
But i can understand peoples hate after all there is one flag i hate .Nazi
Just shows how irrational flag hating is after all it wasn't a flag that killed 5 million Jews .
Funny i could see my self ripping that flag off a truck .
Maybe this lady was not as nuts as you think.
Bet there something you hate that much

I am in bible belt deep red state and I have seen these flags on the end of trucks...a few times and I wanted to rip them off...but would never ever do it bc that is destruction to property.

Just good thing its very few people who are dumb enough to fly those flags.

One of the boys with those flags worked on my house, i might add he did a horrible job painting it and beat up my sunflowers, killed them before my daughter got to see them after they bloomed

I think its a maturity thing, young boys see it as a sign of freedom, being rebelious (not neccessarily racism) and as they get older they want to remove the tattoos and crap bc, well, its dumb.

That flag is not a call for racism, nor is it a validation of slavery. It is a symbol. That's all. It's been used by the Ku Klux Klan, and was flown by Dylan Roof. But that's not what it means to most of us. It's a symbol of our history and our ancestors. I have forefathers who fought and died under that flag (and not a single slave owner among them), as do most people who live here. Our forefathers lost that war, but fought with such tenacity and bravery that it took many acts of sheer inhumanity by a war criminal to turn the tide of battle against them. It stands today as a reminder that we fought hard and refused to roll over to the whims of an oppressive government.

We ran the KKK out of town... we denounced Dylan Roof... we have integrated minorities completely into our society. Those things are right and proper. But now outsiders want our monuments to our forefathers and our flag too. 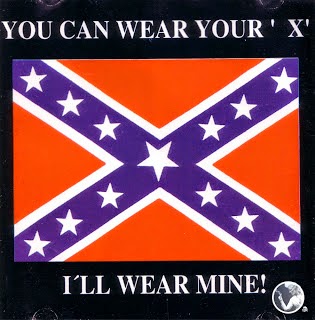 Equality is a good thing... but episodes like this, which are becoming far too regular, are not equality. They are terrorism... impotent, perhaps, as it is difficult to instill terror in brave hearts, but attempted terrorism nonetheless. It seems some want a race war down here, and it's not the typical Southern whites. We want to be left alone. It's people like this lady, criminals looking for a fight, and while their targets might not want a fight... that doesn't mean they won't fight back.

There are already people I know, good people, who are gearing up for just that. The war memorials removed from public display have pushed things to the breaking point. Now, episodes like this are starting to happen.

I will say this: if anyone ever tries to remove a symbol of my ancestors from my property, at least one of us will not leave the scene of the crime vertically. That is too far.

There will be people in this thread who will tell me how racist I am, how terrible I am, how I'm just a 'keyboard warrior'... fine. Spout your filth. But remember my words when things go too far and there's no turning back.

I also think the same about the Nazi symbol.

I am not being facetious.

the Nazi's stole the "whirling logs" symbol from Native Americans and made it what it is widely knows as today.

It means "well being" but the Nazi's ruined that for everyone and made it a horrible connotation.

And somewhere else in the USA there was probably a racist redneck that beat a minority.


Thank you for showing your racist, intolerant, judgemental opinions. At least you're honest about it.

It is fine to disagree and even point out that certain speech or activities have consequences but those consequences cannot be to destroy someone else's property or to run them over. Everyone is allowed to have a voice even if we find that voice offensive or reprehensible. As long as your are not causing bodily injury or harm to someone else, you are allowed to speak your mind, would you have it any other way ?

I have heard that before, and the 'bent cross' does strike me as reminiscent of many Native American cultures. Hitler was a master of propaganda, and it makes sense that he would use such a symbol. No dictator ever claimed to be a dictator, and no warmonger ever claimed to be a warmonger. They always claim the opposite.

originally posted by: tribal
a reply to: randyvs

I think your old man and my old man may have been friends. At the least, they went to the same school of "bring it near my family, and I'll make you wish you never woke up that day".

He didn't happen to be a former US Marine, would he?

originally posted by: veracity
a reply to: TheRedneck

I also think the same about the Nazi symbol.

I am not being facetious.

the Nazi's stole the "whirling logs" symbol from Native Americans and made it what it is widely knows as today.

It means "well being" but the Nazi's ruined that for everyone and made it a horrible connotation.

which is why you think anyone who displays the Dixie/rebel flag is stupid. Gotcha. Please don't hurt yourself with all the flip flopping around.

YES, just as I believe anyone who gets a swaztica (sp) tattoo is an idiot..correct!

FYI, the term "Redneck" was given to rebelling coal miners for the red scarves they wore around their necks by Virginia national guardsmen and a private detective company (mercenarys) hired by coal barons. These miners were striking to get out of the legal enslavement that the coal companies had them in. Many were slaughtered fighting against plutocracy and corruption of government. Those men were subjected to the worst working conditions in the world at the time for slave wages. They were looked at as lower than africans at the time, for the coal barons wouldn't even fill the strikers positions with africans because they were more valuable slaves.

Using the term redneck to designate people as racist or negatively is pissing all over those men who were among the first to put thier necks on the line and die for equal rights and fair wages in this country. Do your homework. Those Rednecks were true fighters of real fascism.

originally posted by: veracity
a reply to: network dude

YES, just as I believe anyone who gets a swaztica (sp) tattoo is an idiot..correct!

that's cool, I have my own feelings about those who think symbols have singular meanings. Tiny minds and all.

Well, with this day and age, its just not smart to get a swastica or rebel flag tattoo or go waving those flags along in public.

I know they have dual meanings, but we live in the here and now and they both have very negative connotations...unfortunately.

Swastika is a religious symbol to all of them. Ever been to a buddhist temple? Swastikas everywhere...must mean those buddhists are nazi lovers.

What about the old black guys i see waving 3 foot wide rebel flags wherever they drive in south carolina.

posted on Jun, 26 2017 @ 11:48 AM
link
I say we demand all buddhist temples get renovated and torn down. They have swastikas everywhere. In fact ban anything vedic.