I am a pilot and instructor. On a students first flight, after they get a handle on the controls, I have them focus on something off to the side, then turn the plane and point the nose at it. After a few minuets they stop thinking about flying and they can make the airplane follow there eyes where ever they look.

When I start teaching them to land, I have them keep there eyes on the center of the runway and not on the plane, tree, car, dog, kangaroo, person... on the side of the runway.

I teach them to look at where they want to go, NOT at what they don't want to hit.

If you want to hit something with a plane all you have to do is look at it.


Really the rabbit hole is this:

1)No amateur pilot could have hit the pentagon the way it was hit with the plane that was suppose to hit it !

What would have been an acceptable way for an amateur pilot to hit the pentagon and what do you base that conclusion on?
edit on 22-6-2017 by mrthumpy because: (no reason given)

originally posted by: GBP/JPY
Naw the hole was very small at the pentagon, neutron baby


Care to actually know the facts?

Care to post or link to what you think is flight 77's entrance hole before the outer ring collapsed?


The Building Façade Damage
The overall damage to the Pentagon West wall, a hole at the first and second floors of 18 ft diameter, roughly centered above a 96 ft gash in the first floor, indicates impact and penetration of the building by an airplane- shaped object46. The body of a Boeing 757 is roughly a cylinder 13 ft in diameter, and the wingspan is almost 125 ft. The 96 ft gash is more than wide enough to accommodate both engines and the wing tip damage is approximately correct for a Boeing 757.

originally posted by: GBP/JPY
It's time for a neutronflush, where's that silver handle

The video also has a cousin, the helicopter reporters doing the first video.....there onsite, reporting not enough debris to fill a suitcase

Can you cite a source?

Ok, discredit the photo of the guy carrying a piece of fuselage bigger than a suitcase while recovering wreckage from the pentagon lawn.

What is the silver handle made from? Silver plastic? Cheap silver coating? A cheap handle lost its coating or broke while a larger item that is tough and made from fireproofed fabric is still identifiable by shape in a photo?

What does that prove?


Please explain what was burning in that orange fire ball ?
Explosives have a quick orange explosion.
Not an on going fire ball that rises into the sky.

What's the curriculum for training pilots to hit a building 10 feet off the ground flying a 155 foot long Boeing 757 at 500 knots while evading over 80 CCTV cameras? Just curious.

The first plane wasn't filmed hitting the building by an amateur. They were documentary filmmakers with several years experience. And if you watch the video there's nothing strange about it. He was standing upright, with other people standing next to him that he is filming, which completely debunks your accusations that he had to be lying on his back. He turned the camera in the direction the plane was flying, seems like a logical place to aim the camera if you want to film the plane. And the camera is shaking.

Where do you people get this #? It's the most ridiculous drivel and is debunked by 30 seconds on YouTube. Literally every single part of your post is blatant lies.

Nice fiction. You can't make anything out of that video to tell whether it was a plane or a missile. Furthermore, the reporter you're quoting was taken out of context. In other parts of his report he clearly talks about aircraft debris. Get informed, then post.

Reporter: "The only pieces left that you can see are small enough that you can pick up in your hand. Uh, there are no large tail sections, wing sections, a fuselage; nothing like that anywhere around."

Now, onto the video. Once you see a smoke trail enter the frame, you don't see the rest of the alleged plane. Keep in mind, a Boeing 757 is 155 feet in length. Positively, you would have seen most of the plane in that frame. You cannot see it, because it wasn't a Boeing 757. Look closely and you will see that whatever it was is behind that piece of equipment in foreground. Possibly a missile, possibly something else. What it wasn't is a damn Boeing 757. That is a fact!

originally posted by: DClark
a reply to: face23785
LMFAO, how in the hell is he taken out of context. JFC, just listen to the whole thing. smh

Reporter: "The only pieces left that you can see are small enough that you can pick up in your hand. Uh, there are no large tail sections, wing sections, a fuselage; nothing like that anywhere around."


I love how you're still just taking part of his quote. For anyone interested in not forcing themselves to remain stupid and ignorant, here's the entire audio of what he said. It's clear what he's trying to say is no, there's no evidence of a crash site outside the Pentagon, because the plane went into the Pentagon. But don't take my word for it, take his.

MCINTYRE:
Of course, having been there on September 11th, having seen the plane wreckage and photographed it myself personally, I can tell you that that's nonsense...

...You were able to get pretty close for a while. Eventually, they cleared out the scene.

As I said, I had a camera with me. I took pictures of some of the wreckage, some of the parts of the fuselage, a part of the cockpit, until they told us we had to move back away from the scene. I saw thousands of shards of metal, of pieces of the plane all over the driveway. I didn't pick up any of them or touch any of them, but I saw them everywhere. And again, took some pictures of them. So there's no doubt that the plane hit the Pentagon. I mean, for no other reason than we know the plane took off at Dulles Airport and people on the plane, you know, made cell phone calls. We know a plane hit the Pentagon. It's just interesting to see the documentary evidence. Some people just don't believe it until they actually see it.

Now, as for the video.

Now, onto the video. Once you see a smoke trail enter the frame, you don't see the rest of the alleged plane. Keep in mind, a Boeing 757 is 155 feet in length. Positively, you would have seen most of the plane in that frame. You cannot see it, because it wasn't a Boeing 757. Look closely and you will see that whatever it was is behind that piece of equipment in foreground. Possibly a missile, possibly something else. What it wasn't is a damn Boeing 757. That is a fact! In the 2nd frame, above the yellow box you can see something tall sticking up above the point where the previously visible treeline was. At first glance it doesn't appear to be much different but if you go to the actual video and switch back and forth between those 2 frames keeping your eye on that spot, you will clearly see something dark and tall is there that wasn't in the previous frame. Whatever that is is tall enough that it extends up from at least the point where the smoke trail is, if you believe the smoke is being caused by the object.

Now I'll ask you, have you ever been near a missile? I have, thousands of times. They're long and skinny. An AIM9x is 5 inches in diameter. The only thing that sticks off of them are the stabilizer fins. The stabilizer fins are usually around the size of the missile's diameter, sometimes smaller. Even cruise missiles don't have stabilizer fins big enough to account for that object. The object in that frame simply can't be a missile, it's too big. Based on the video evidence it's impossible.

Within the 9/11 Conspiracies forum, the Terms and Conditions will be strictly enforced, along with the following additions:

Name Calling: Tossing around indiscriminate name calling such as "OSer," "Shill," "Troll," "Truther," and all the other related nonsense will not be tolerated. Depending on the severity, you may experience an immediate account termination with no warning.

Personal Attacks: Taking focus off the subject matter and toward each other will not be tolerated in any form. You will experience an immediate account termination with no warning.

Thread Derailment: Posting of any irreverent or ridiculous information that disrupts the flow of productive discussion will not be tolerated. Depending on the severity, you may experience an immediate account termination with no warning.

Trolling: The repeated posting of content that supports any specific position, without interacting with members regarding that position will be considered Trolling in the 9/11 Forum. Depending on the severity, you may experience an immediate account termination with no warning.

Minimal Posts: Any minimal post that is nothing more than "atta-boy" agreement, or "nope" disagreement will not be tolerated -- if you post, contribute something. Depending on the severity, you may experience an immediate account termination with no warning.

External Sources: There has been way too much copy-and-paste of massive amounts of content from external sources. You should never post more than FIVE (5) paragraphs from each external source. If you post more, we will indiscriminately cut it down to two or three paragraphs. If you do this repeatedly, you may experience an immediate account termination with no warning.

Do not reply to this message.

A Boeing 757 is 155 feet long and its tail is 45 feet high. Based on the angle the camera is facing and comparing the amount coverage from said camera with the distance between the building and the 'Pentagon' road perpendicular to it, one certainly realizes that a plane that large would appear in that frame.

It's actually simple trigonometry. Take a look at aerial images or google earth from then and measure the distances and you'll find that there is no possible way to not see a plane that large in the frame mentioned.

BTW, the link you provided to the "entire audio" is the same exact audio in the video provided. Nothing was taken out of context.

Way to not address anything I said. Why don't you run the numbers and prove that object is small enough to be a missile? Obviously this is not 100% correct. For instance, the path of the incoming object was not 90 degrees perpendicular to the Pentagon wall, but was in fact at an angle coming in slightly the right of perpendicular. That means the object is not the same distance away from the camera as the impact point is, it is actually further, so my measurements will be off. However, that means that the object has to actually be larger than my calculated size to have the apparent size it does in that still. Even if my margin of error is 50%, that still means it is over 10 feet tall. The object is way too big to be a missile. What that object is I have no idea, however its clearly not a missile.


It's about as likely as having a bald eagle drop a king salmon on your head while walking across the Sahara desert. 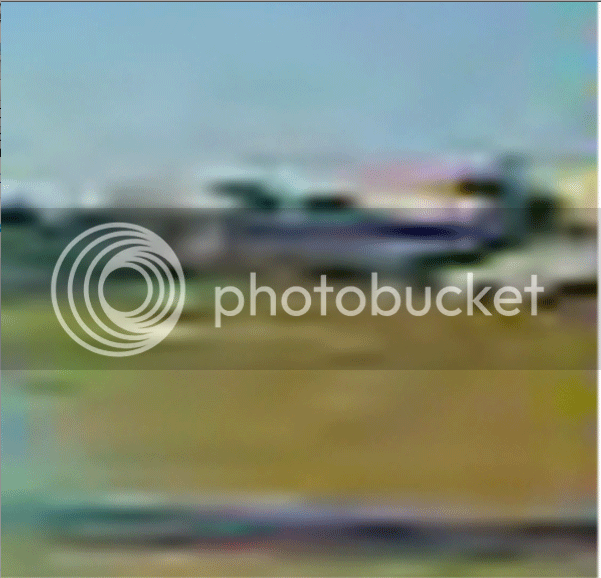 This is a scaled to distance/angle B757 superimposed over the frame.

The plane is there exactly where it should be.