posted on Mar, 10 2017 @ 03:47 PM
link
I made this thinking about the sort of fictional book cover design called 23 to make for my favorite female Doctor, the delightful Lilly Nelson. Her Doctor Who fan episodes are quite entertaining. Allons-y. I'm a Doctor Who fan (I saw every single one, starting from Hartnell). The Doctor isn't supposed to be ginger. Ever.

I miss Catherine Tate. I'm saying this because in one episode she becomes Doctor-like, and she totally nailed David Tenant's mad behaviour.

originally posted by: swanne
a reply to: Tindalos2013

I'm a Doctor Who fan (I saw every single one, starting from Hartnell). The Doctor isn't supposed to be ginger. Ever.

I miss Catherine Tate. I'm saying this because in one episode she becomes Doctor-like, and she totally nailed David Tenant's mad behaviour.


The Doctor-Donna idea was great. As was their reunion moment in the "Partners in Crime" episode.

Watching all of the classic series is something I might think about doing at some point. I can vaguely remember about some Fourth doctor episodes and the same with the Seventh Doctor. I skipped watching most of the Matt Smith era and now am re-watching the Capaldi era and what a superb performance it's been.

Do you own a sonic screwdriver? I'm waiting for the eleventh's and Twelfth's Doctor sonic Screwdriver I ordered online.

I found Tom Baker to be the first to actually give the Doctor the flare he has today. Jon Pertwee was cool, but a bit too James Bond; Patrick Throughton was a bit too emotional, and William Hartnell was a bit too grumpy and vulnerable.

David Tenant is great (who can argue with that? He rocked! ), but I also think you'd like Matt Smith. I too was sceptical at first, but he ended up being one of my favourite ever. He's actually pretty awesome.

Capaldi is a nice comeback to the classic era. I know people say Capaldi isn't as dashing as the others, and that he's a bit grumpy and stuff, but I think he nails the role with mind boggling precision. His Heavensent episode left me gaping with absolute awe.

I haven't got a sonic screwdriver... Yet.

Have you seen the Doctor Who parody with Rowan Atkinson? It's absolutely brilliant.

Didn't the 4th have the same as the 3rd? 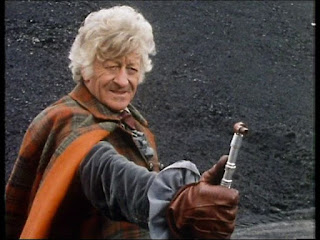 Hm, You might be right. I'd have to check.