At least they are showing their true colors now.

posted on Mar, 15 2016 @ 08:15 PM
link
One would think it would be more beneficial for American citizens if Anonymous could unearth and publicise dirt on Hilary..seeing she most likely will be the next prez.Oh well there goes what respect i had for Anonymous.


originally posted by: Atsbhct
Do you think this might be an April Fools joke, considering it's happening on April 1?

Who was it that said that there are many anon cells, a few of which could be operating out of alphabet agencies for the PTB. Seems possible enough to me, since the trend is for them to determine outcomes by controlling the opposition. Maybe there some funding for anon through diverse channels, managed and controlled by scumbags like Soros and the Kochs.

It is always wise to question who is behind an Anon operation.

In this case I believe it to be someone who is legitimately concerned about Trump's success in the psychological warfare being waged against the populace.

We are seeing the timely arrival of someone to continue pushing the racial/ethnic divide the MSM has been cultivating over the past decade. Culminating in the violence we are seeing him openly call for.

I have said it many times that IMHO Trump works for Hillary and is quite successfully destroying the Republican party while also diving as many people as possible. My hopes is that this Anon campaign brings to light the Clinton/Trump connection beyond mere speculation!


It's not an anon operation, even if it has the appearance of being staged as one. The Donald produces two equally probabilistic futures, one that attempts to and potentially begins the process of repair as well as the destruction of the corrupt system and a second that quickly reduces the US to anarchy through civil war. Although the previous outcome is not seemingly good, it still has a good side, that being the elimination of the PTB in the US. I can't see Trump turning dictatorial although he can steer the ship, the POTUS is after all, just a figurehead, but he is a nationalist.

The US needs a nationalist, someone to at least try to protect national interests rather than sell off everything to offshore interests. I would hope the first thing he would do is nationalize the federal reserve.

Every yaywho in a mask can claim to be anon now and do.

Meh. You don't tell the enemy you're coming. Thats not anons style. Vague threats are just that.

I already know Trump is a blow hard, a bag of hot wind. He 'gets things done', I could too with a narcissist attitude and his money.

Trumps formula for popularity is to emulate the trash talk reality tv shows, people eat that s*** up and he knows it.

originally posted by: Konduit
Anonymous is the perfect example of controlled opposition.

At least they are showing their true colors now.


They may have started as legit but i suspect the people behind the operation are either dead and or now working for three letter agencies....

originally posted by: Raxoxane
One would think it would be more beneficial for American citizens if Anonymous could unearth and publicise dirt on Hilary..seeing she most likely will be the next prez.Oh well there goes what respect i had for Anonymous.


That would require them not being a government front. 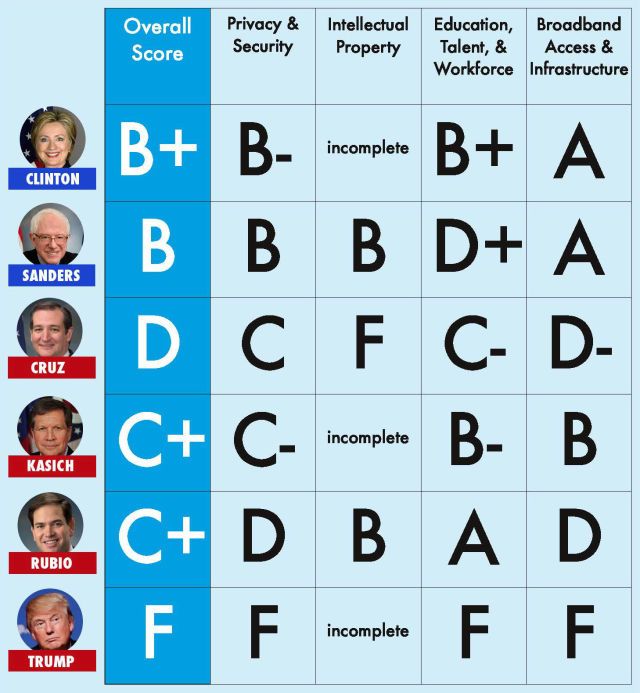 "Privacy and security" based on whether they understood the importance of strong encryption and supported reforming privacy and surveillance laws.

"Broadband and Infrastructure" rated how the candidates stand on net neutrality and municipal broadband.

As I have stated before I could care less about Trump voting the Tater Salad (Ron White) myself, but considering they are going after him instead of Hillary that is what is tipping me off that this sect of them work for the government and the Status Quo. If this Sect was legit about righting wrongs they would have already taken out Hillary and Pushed for Bernie.


This is a great point I have thought about myself.

Where is the campaign against the corrupt maniac know to the world as Hillary!?

Good god I can only hope that there is one of these coming!


originally posted by: Raxoxane
One would think it would be more beneficial for American citizens if Anonymous could unearth and publicise dirt on Hilary..seeing she most likely will be the next prez.Oh well there goes what respect i had for Anonymous.


That would require them not being a government front.

You are both on point with this!

I hope that we shall see them be very active for the remainder of this election process, this may simply be the start.

I hope Anon doesn't support another President Clinton! She would be worse than Trump.

Not to mention exposing 911 truth and getting Obama out of the Oval office. Well I guess you could say that Trump was right!

And a public relations representative with People told us that the magazine couldn’t find anything like that quote in its archives, either. People‘s Julie Farin said in an email: “People looked into this exhaustively when it first surfaced back in Oct. We combed through every Trump story in our archive. We couldn’t find anything remotely like this quote –and no interview at all in 1998.”
Link

Funny thing is, he was not wrong.

Not to mention exposing 911 truth and getting Obama out of the Oval office.

Yes you speak of a couple of issues that have kept on the fence about the effectiveness of this group.

Clearly part of it is used by the government for psy-ops.

Then you have legit hacktivists being targeted by their own like we saw with Sabu of the Lulzsec.

However there are wise and benevolent members, like the ones who went after Stuebenville and got that corrupt town put on trial. I do not think that Guccifer has any allegiance to this crew yet still shows the effectiveness that real hackers can bring to the table.

Funny thing is that he didn't say it.