So it begins: German politician stabbed in the neck

And you're spot on doing so! The thing is, they only avoid objective discussions and thus elude to personal attacks. Which is precisely what just happened again.

Pass on my best wishes, but he really needs to look into 9/11 again.

posted on Oct, 18 2015 @ 11:23 AM
link
I feel for the true refugees..damned either way, having said that i think far too many males of fighting age are refugees, I feel like they should be in boots and rifle..go fight for your country.

posted on Oct, 18 2015 @ 12:44 PM
link
I still think of the 57 year old German nurse, Bettina Halbey, being kicked out of her local government owned flat, to make way for immigrants, I bet she just loves them, immigrants and local government.

posted on Oct, 18 2015 @ 01:00 PM
link
This is not Europe's responsibility to feed and house these people. Send them back with a gun and tell them to fight for what is theirs.

Well according to you they aren't really "right-wing extremists" they are just criminals and we are being manipulated into thinking they actually stand for something outside their own personal gains. A good double speak, glad I caught it but this is typical behavior for people who fall in the hate America first crowd.


Lulz. forgetting for a moment the hate crowd that blame every crime on Islam. And believe everything the mainstream media says about that.

And further hates on those questioning the media (really?).

As has been said many times on this site ...

The vast number of seemingly very fit young men? coming in with

the immigrants, and displaying very aggressive behaviour, as seen

on many news channels.


Personally, I'd be more worried about the women and children whose families got wiped out in US air raids. The women will get jobs in the service industry and poison the buffet, the kids who's parents got killed will grow up, get on the internet and learn that every EU member is also NATO, and NATO bombed their homes to dust. Theres your sleeper army.

Enjoy the blow back.

Yo public opinion put down your sword stand down, in another thread of mine intrptr said that Muslim extremists do not exist that they are just criminals and extremism is all a spin specifically Muslim extemism. Yet here he is saying that right-wing extremism exists.

for your viewing pleasure

I'm challenging that belief, I apologize for the lack of context, but it is infact double speak period end of story.

Just so we are clear, you misrepresented what I said in that other thread, then replay your version of it here…

all because i called you out on inciting hatred towards Islam. (others can read all my content in that, not just the disinfo post member spouted).

Nice one, book marked. Next time you stab me in the back, at least give me a reach around.

I did not misrepresent anything read it yourself, it's for all to view. Does extremism exist? Do people actually believe in extreme ideologies and carry out the deeds of their beliefs, or are they just criminals and liars? Simple really, but you avoided it, and also made a wierd statement about giving you a reach around. Engaging in double speak gets you called out on ats.
edit on 18-10-2015 by TechniXcality because: (no reason given)

I did not misrepresent anything read it yourself, it's for all to view. Does extremism exist? Do people actually believe in extreme ideologies and carry out the deeds of their beliefs, or are they just criminals and liars? Simple really, but you avoided it, and also made a wierd statement about going you a reach around. Engaging in double speak gets you called out on ats.


In a thread you started, you used word association "Islamic extremism" three times in the first paragraph, thats what I called you on. Noticed you left out the "islamic" part in your reply, this time. Now its just "extremism".

At least you're talking to me instead of talking about me in a different thread. You've heard the term gossip, slander, defamation of character, before?

Have you herd the term, avoiding the question? I don't care what "form" extremism takes nazi-extremism, Islamic-extremism,does it exist yes or no? Very simple, please answer the question. In the beginning of the thread you said right wing-extremism exists, do you recant that statement? Are they all just criminals and liars? Stop avoiding the question its getting rediculous.
edit on 18-10-2015 by TechniXcality because: (no reason given)


You don't have a question, all you have is vitriol for those that don't see things your way. Your "extreme" views about other peoples and cultures, your "extreme" hatred of them is very extremely evident.

All that hate is going to burn you up, son.

Ok, I'm trying my best here, so my extremism exists, rightwing extremism exists, it's a logical to assume by your statements, though you will not give a yes or no,(because your whole #-house comes tumbling down at that point) it's logical to assume from your own words, that extremism of all types exist, even yes even ISLAMIC-EXTREMISM. Anyway it's circular and pointless and you refuse to answer. you have at this point accused me of defamation of character/slander which are legal terms(rediculous and would like proof) and then you turn right back around and call me an extremist. Yea buddy, I'm going to have to say this battle is lost and you need to abandon ship. From here on I have nothing good to say to you or about you, I'm done.

Let me chime in here:

Does extremism exist? Do people actually believe in extreme ideologies and carry out the deeds of their beliefs, or are they just criminals and liars? Simple really...

It's not that simple, depends on the case as 'extremism' is only a lable. I've been called extremist so many times that I lost count. The word 'radical' sterns from the root (radix), as in root of the problem. Radical solutions may be of use if applied correctly, we won't get anywhere without delving further into the subject here.

You guys know what I see? Since 9/11 it's all about muslims, islamism or jihad but right-wing terror was completely out of focus. The actual numbers suggested the opposite, but truth is not the game of choice anymore.
Then there was this NSU-scandal with deep involvement of our nice nanny-state with old Gladio-ties. Some of us had hopes all that would finally come to light eventually during that investigation called cover-up, but then somebody ran into a mincer on a dark corridor or something. All the sensitive data was lost, the President took his hat and resigned without further babbling. But the damage was done, yet once again.

Ex Präsi Köhler had to take his hat after he officially stated, that we defend economic interests in Afghanistan. But yet, the glorious War on Terror goes on and on and on. Now we see a rise in right-wing extremism and various outlets of similar political movements like Pegida or AfD popping out of nowhere like the good old shrooms.
But guess what? It's all about bad Putin or maybe lazy Greeks and the next austerity cuts due to this new 'classic': waves, storms or apocalypse of refugees (depends on which you prefer).

No matter how you spin this, when you still believe (pun intended) that Islam is the problem, I can only assume you didn't really think this through.

We suffer from an highly radical 'extremism' of such kind, that continuously obfuscates reality and advocates extreme and extreme dumb measures. It has various outlets for this whole market of human vote-stock, would be laughable if not so many people are likely to fall for this in their bubble of plain consumerism.
We're being played folks, big time. I can see parallels between the 'Arabic Spring' and this recent 'Xenophobic Spring', everything will be exploited to further spread chaos. Mark my words. 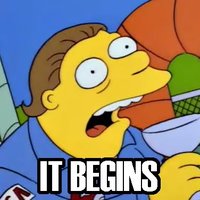 It isn't a weapon, (or a hunting knife), though it was certainly used as a weapon. It's an ornament. Not the first time an ornament has been used to assault someone, but usually because the ornament was at hand.

When analysing this event it is very important to get the facts straight. This man sourced an ornament, not a weapon, to carry out his attack. What does that say about him?

To blow this up as a knife attack, rather than an ornament attack, and make political mileage out of it, is to take advantage of an obviously mentally challenged individual.

For the good of humanity this unfortunate event is best used to bring attention to the ornamental knife industry, responsible for bringing many dangerous ornaments into people's homes.

90% of the knives on the market have no sensible practical application, but can hurt people.
edit on 19 10 2015 by Kester because: punctuation

posted on Oct, 19 2015 @ 02:58 AM
link
I'm highly suspicious of the repeated showing of photographs of this ornamental replica knife in the media.
This isn't being played straight by any means.
We should have sympathy for the injured, lock the poor man away, and get on with life.

Making a big deal out of it is making a mountain out of a molehill.