posted on Oct, 2 2015 @ 04:38 PM
link
Many anomalous occurrences have happened around Robbert van den Broeke of southern holland since he was a young adult, he also has seen many crop circles form in several different fields over the years. Objects of light is what is seen making them, with some of the objects he has seen range from columns or "tubes" of light, to balls of light, disks of light, to just sudden flashes of light. The forms of light, when seen creating the crop circles, discharge some type of energy and/or will have a rapid spinning motion swirling downward to the crop. Robert somehow knows when a formation is going to happen, getting a type of "message" and will feel unwell and be very anxious up until the crop circle is formed. A number of witnesses have also been with him while seeing a crop circle form.

In 2008, a friend of Roberts was a witnesses to a crop circle formation for the fist time. After having the awareness that a formation was going to occur, they both went out to look for a field in which it might be formed in, first checking a known field where several have been created before. After going on to a different field and upon walking in, his friend Stan reported sensing a "peaceful, loving " feeling brought onto him. Directly following this, a football-sized orange ball of light popped into the air. After hovering in one spot, the ball then split into 3 different spheres, then into 6, all the same size. They then began to move and started to rapidly spin in a circle to where they appeared as a solid ring. The spinning formation, not far from both of the men, dropped into the grass creating a perfect circle of 3 meters in diameter. They could see plants swirling then both proceeded to hear the "electro-static" noise that is often heard in crop circles not long after their creation. The friend reported that he felt “hot inside” with an intensity of a loving “presence” when he entered into the circle, also saying this event changed his life.

In May of 2013 Robert was again having his feeling of restlessness that precedes crop circle formation or other anomalous occurrences, and that after feeling the energies he saw in his minds eye an airstrip in the area and knew that's where he had to head. When he and the witness got there nothing was in the field, but shortly after walking into the field they reported that a strange silence came over the area as if “some sort of a dome...some sort of vacuum” had came about. Both the men started to feel a “static electricity” in the air and as soon as the witness turned on the camera he brought hoping to capture something that Robert has seen many times, Robert saw a flash of light and the camera batteries then died.

Right after this both saw a black/gray ufo shaped craft as big as a small house about 20 feet above the field that had square multi colored lights around it's lower half. The object had a hole on its underside of which out came 4 small sliver objects. The objects flew toward the ground and as they did a 44m-long, 25-circle formation instantly appeared in the field. They then both noticed two tall figures at the beginning of the field who Robert says felt like they where "guards" of some sort. The witness says the beings where around 12 feet tall. They were a grayish-white color and had "a kind of glow” around them and their heads seemed directly connected to their body with no neck as well as no arms or legs. Robert and the witness both also say they saw that the beings had three very round eyes that were larger then humans. Just as other happenings that witnesses see when with Robert, none of them felt scared or anything alike. After the formation was made and the small objects entered the large one the beings disappeared into the air. The ufo then "went off...like turning off a TV.” and the noise of nearby woods and field then came back on. Robert states that when they first entered the field and realized the noiselessness he felt like he was in a different dimension. The witness also states that during the encounter and the feeling of protectiveness that he also felt like being in a different dimension and that he couldn't feel his body but only his being, or his 'spirit. A farmer who lived nearby also saw the large flash of light on the night of the encounter.

Thanks, and you said it man, I wonder about this stuff everyday of my life and all the different looking or types of alien beings reported though history, the different other worldy technology and dimensions that seem to be full of beings along side our dimension


I have always been skeptical of seers/psychic readers in the PMM (paranormal money machine), with websites and books...
I wonder what his method is?, as like most others (Jonathan Edwards), he does not phish the subject first to glean clues as to better his odds of accurately describing events in their life. He basically comes right out with the information. Is it really a cold read, or is he getting info on them from elsewhere, real time?
edit on 3-10-2015 by charlyv because: (no reason given)

What because he does healings, that's not any proof to discount his story or any of the people who have seen paranormal events at his house and if you think theres no such thing as healers and that it's fake well your just wrong. Even if that's what you think and it's true it doesn't even matter, the fact of the matter is that ufos, spheres of lights or orbs have been seen in and around crop circles in countries there made in, the formations have aspects were not capable of creating. They can have high backround levels of radiation, radio active isopotes found in soil, depleted underground water tables, cellphones and professional news cameras failing only within the formation, compasses can't find north, nearby electrical power downs of people houses after large formations appear over night.
edit on 3-10-2015 by Telepathy3 because: (no reason given)
edit on 3-10-2015 by Telepathy3 because: (no reason given)

originally posted by: stabstab
They are drones that do the crop circles. Seen them before.

A fraud eh? the truth is out there even so.

There's no way a drone could make crop circle,have you actually seen this with your own eyes? It is how ever widely documented that precision farming techniques using autonomous GPS guided tractors could account for the majority if not all crop circles.

As far as I'm aware the only ever video evidence of crop circles being created by 'orbs' was admitted to have been faked by the guy who made it.
edit on 3-10-2015 by Imagewerx because: (no reason given)

posted on Oct, 3 2015 @ 02:23 AM
link
He is most famous in his country for an interview back in 2006 where he said one of the deceased he sensed was a "genverbrander". However, the info was from a genealogical site which contained a typo which Robbert didn't notice and repeated. The occupation was brewing Dutch gin "geneverbrander". His most recent claim as I recall have to do with sending Joran van der Sloot strength and love and spiritually appearing to him while he is in jail for killing a woman and suspected of being involved with the disappearance of Natalee Holloway. It's hard to believe Robbert is still active and has a following.
edit on 3-10-2015 by johnnyjoe1979 because: (no reason given)

Massive formations appear within a few hours of darkness, take this guy out of the equation and you still have hundreds of people that have seen the spheres of light or orbs in and around newly formed formations, you still have the high levels of radiation, the radioactive isotopes in soil, the electrical failures of batteries or phones inside formations and nearby houses effected by the energies, the compasses that won't work

But if you choose to ignore the fact that BLT find evidence they want to find then these little details probably don't matter.

originally posted by: Telepathy3
a reply to: Soloprotocol

the fact of the matter is that ufos, spheres of lights or orbs have been seen in and around crop circles in countries there made in, the formations have aspects were not capable of creating. They can have high backround levels of radiation, radio active isopotes found in soil, depleted underground water tables, cellphones and professional news cameras failing only within the formation, compasses can't find north, nearby electrical power downs of people houses after large formations appear over night.


Any Proof of these claims. Lets cover this...

Funnily enough but not spooky, my power just went out for a split second as i read the bit you posted about power downs ( i did jump though because my radio made a loud buzzing sound as it shut down) ...should i go check for a crop circle?

Radiation in rocks? Ok, that hade nothing to do with radiation levels spiking in formations, where not talking about rock formations. You didn't mention radioactive isotopes in soil, alteration to plants, and video of anything you don't want to believe in is useless because you don't want to believe it, there all fake apparently
edit on 3-10-2015 by
edit on 3-10-2015 by Telepathy3 because: (no reason given)
extra DIV

Blt is one group, try accounting for the others across the countries that formations happen in, like I've said humans aren't accounting for the radioactive isotopes in soil, depleted water tables, orb sightings, power failure, and alteration to formation plants
edit on 3-10-2015 by Telepathy3 because: (no reason given)

As was shown in the last thread BLT are a group who found anomalous high energy readings in a natural and a known man made formation set up by Collin Andrews , the article linked is again from BLT.

Are other groups whose whole raison d'etre is the mysterious origin of Crop Formations and finding the link between formations and the paranormal any more credible than BLT ? , personally after years of research I don't think so. 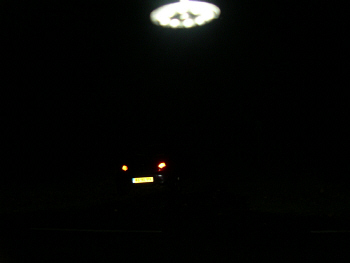 Here the "UFO" appears to be a little higher over the car, and smaller. It appears to be made up of light-balls, perhaps revolving inside a light-ring? 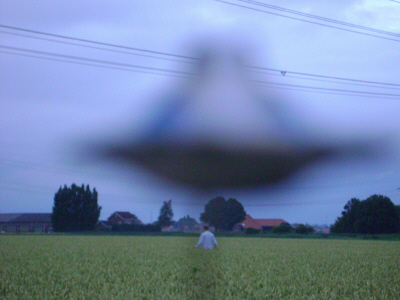 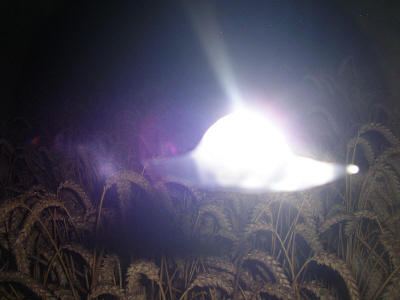 I can't fight that I guess cause your entitled to it, but that is your opinion and your research doesn't go into the fields where sightings occur, abnormal readings are found, and clear alteration to formation plants is noted by people working in labs wether for the blt team or not

posted on Oct, 3 2015 @ 03:30 AM
link
a reply to: Chadwickus
I'll say for the four time it doesn't matter if you believe this to be real or not, fact of the matter is the scientific aspects of formations that aren't able to be recreated. Plant alterations, radioactive soil, power failure, water table depletion, light sphere sightings
edit on 3-10-2015 by Telepathy3 because: (no reason given)


a reply to: Telepathy3
Nothing would make me happier than evidence for ET visitation , I would be happy just to know they are out there even if they haven't come here but the whole industry that has built up around Circles and UFO video channels really do have nothing to do with ET.

You are free to believe as you please but the TRUTH is out there is you chose to look for it.