Another Shocking Announcement! Tut's Death Mask Originally Made for Nefertiti?

posted on Oct, 2 2015 @ 12:10 PM
link
Egyptologist Nicholas Reeves of the University of Arizona was catapulted into the international news this summer when his published analysis of scans of the walls of Tutankhamun's tomb revealed evidence of two chambers hidden behind its murals. Earlier this week, Egypt’s Antiquities minister Mamdouh Eldamaty announced that an examination of the walls this week supports Reeve's analysis.

Reeves believes that the tomb in which Tut was discovered may have originally been the burial chamber of Tut's stepmother and wife of the monotheistic pharaoh Akhenaten, Nefertiti, whose final years and place of burial have long been the subject of much speculation.

He argued that a painting located behind King Tut’s sarcophagus has been wrongly interpreted. The painting shows Ay (who largely directed King Tut's reign and succeeded him) performing the Opening of the Mouth ritual on the boy king.

According to Reeves, the tomb of King Tut was not ready when he died unexpectedly at 19 in 1323 B.C. after having ruled a short reign of nine to 10 years. Thus he was buried in a rush in what was originally Nefertiti’s tomb, who died 10 years earlier.

Reeves told reporters the tomb’s examination revealed several unusual features, such as a contrast in the materials that cover different parts of the same wall and an extended ceiling which suggests King Tut’s tomb was originally a corridor.

Yesterday at a press conference at the State Information Authority in Heliopolis, Reeves dropped yet another bombshell — the world's most iconic death mask might have been originally made for Nefertiti and not boy king! Furthermore, he's hypothesizing that as much as 80% of the grave goods discovered in Tut's tomb might actually have been Nefertiti's! Aram Online - Tutankhamun's treasures may have originally belonged to his stepmother

“I thought that it was very strange and may just be a technical feature.” However, he also noticed that the type of gold used for the face is different than that used on the back of the mask as well as the inlays. The eyes are in lapis while other blue portions of the mask are made from glass.

“It is very unusual,” Reeves said, adding that he then started to look at other features of the mask.

When the mask was uncovered, Reeves said, the earholes and the ears themselves “were covered with little disks of gold foil which I did not understand at first.”

“But the funerary mask has holes to hang earrings,” he pointed out.

I was trying to see if i could find some pictures from the inside of the mask, to see if we could agree with him, but no such luck.

I found some pics of the back and side though, which is rarely shown, we always see the front.

It's kind of interesting how this unfold, and cant wait for the result of the new search for hidden chambers to be revealed. 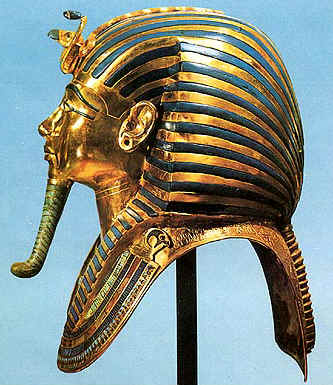 Nefertiti's appearance is attested to by another iconic Egyptian relic, a bust believed to have made by Akhenaten's official court sculptor, Thutmose, discovered along with a couple dozen plaster casts of royal faces in 1912, during excavations of what is thought to have been the artist's studio. Here's a picture of the bust from its Wikipedia page: The left earlobe is missing from the bust but the right earlobe is not and its pierced (or stretched/"gauged"?). Now look at these two busts found in Tut's tomb (KV62) which have been identified as depicting Tut (images from Wikipedia - Tutankhamun) In my opinion, there are three possibilities:

I'm actually leaning toward #3 myself. The bust of the head emerging from the lotus, seen from another angle here (source), this face looks distinctly female to me. and here's a front view of the other (source: The most recent reconstructions of Tut based on scans of his remains suggest that he was not an attractive person. The sculptors of these pieces were extremely talented and they're certainly intended to be realistic depictions. The wooden busts don't particularly resemble the death mask in my opinion either. For my money, I don't think any of these were originally created as depictions of Tut tough other possibilities would be that the sculptors purposefully improved his appearance or the reconstructions are horribly inaccurate.

It looks like Reeve's theory about the funerary goods and mask predates his recent discoveries by some years. Here's a link to his website. An excerpt:

Several other spectacular items from Tutakhamun’s tomb bear legible cartouches with Nefertiti’s name overlaid by that of the dead king, including the miniature coffins used to enshrine his viscera. Numerous other objects were clearly made for a different intended deceased, and were pressed into service when Tutankhamun died unexpectedly.

Remember this news item from January of this year?

Beard on King Tut’s Mask Snapped Off, Glued Back On

posted on Oct, 2 2015 @ 02:23 PM
link
a reply to: theantediluvian
Correct me if I am wrong, but did not Tutahnkamun reject his father's Monothesism?
Akhenaten was practically erased from all official monuments and such, I could see the fledgling boy king's court also usurping his mothers tomb and grave goods in an effort legitimize his reign and delegitimize his parents.
One thing for sure, these objects are a testament to the skills of the Egyptian artisans.
Even though Tut and family were much later than the pyramids, the skill of the artisans in that period was just as impressive, and people still question that they built those grand tombs.

I was just recently reading about Tut. The author commented more than
once that his appearance was feminine or androgynous but attributed
that to his being born from what we would consider incest today.

posted on Oct, 4 2015 @ 08:29 PM
link
This is nonsense, the Mask has conclusively been shown to be a good representation of who it was covering originally posted by: bigfatfurrytexan
a reply to: Marduk

I know what's being said, but its still nonsense, a lot of Tuts grave goods are known to have originally been reserved for Smenkhkare, but the Mask has his face on it,

If Nicholas Reeves continues to make unsupportable claims like this, he will be kissing goodbye to any work in Egypt. The Egyptian antiquities commission takes a dim view of this sort of thing