I dun understand what that means?

It is impossible to prove that something doesn't exist to someone who believes it does. I've shown you how the hoax evolved. Neo-Nazis continue to perpetrate the myth of the Hannebau because it makes the Nazis look superior. It ultimately ties in with their mythology about Vril.

posted on Aug, 31 2015 @ 08:54 AM
link
In my humble opinion, you need to do much, much more research. Read some of MUFON's data. Check out Jacques Vallee and Stan Friedman. Weed out the crackpots from the serious researchers.

Many, many UFO threads here on ATS alone will make you rethink your belief that all UFOs are man-made.

Do an internet search for Nazi nuclear research.

I agree! Some ufo's very likely are government made by both the U.S. and other countries. But there is that 5% of sightings that are not able to be explained. I am reading one of the better books about ufo's that I have read in a very, very long time called "The Presidents and UFO's" by Larry Holcombe. There is alot of incidents with ufo's expecially around the years of Roswell say late 1940'd to say 1950's, and many are military encounters that I had never heard about before. These were of the kind where Military Officers are told, " do NOT talk to anyone about this" kind. Probably because we all know how well the U.S. government and military claim they no longer have any interest in ufo's. But thats simply not the truth. I don't have time right now to go into any more about this book, but I do plan on posting a thread about it when done. Its been a fascinating read thus far.


You are on the verge of making me think I might become confused by your posts.
You posted this on page one of this thread:

The Die Glocke is stored inside a Haneubeu 2.


Are you now saying that you don't believe in Hannebau?

originally posted by: LukeCahill
If you had read up on History.

" If you had read up on History" Eh?
All the stuff you mention is not just old hat, it's repeated Ad Nauseam over and over again in the rubbish documentary channels, while only the graphics change. Certainly go and dig for yourself, but I don't think you should start a thread that is singularly presumptive about what others may think or have done.

2) The elite worship ET's and sacrifice to them at Bohemian grove.

Now you are correct, UFOs are undoubtedly real.

There is no question about that.

There probably are some that are man-made as well.

But those behind the sightings and abductions are clearly not man made.

The vast majority of alien encounters involves some type of spiritual phenomenon.

I haven't seen ANY evidence that suggests UFO's are spaceships.

This is the very reason that there is so little solid evidence for UFO's.

That reason is because they are NOT UFO's.

In order to connect the dots, you MUST look at the stealth agenda.

The 'aliens' are clearly lying in order to hide their true intentions.

The bottom line is that in order for the agenda to succeed, it has to be covered up behind a wall of deception.

John Keel, one of the most respected researchers in this field, noted that “over and over again, witnesses have told me in hushed tones, ‘you know, I don’t think that thing I saw was mechanical at all. I got the distinct impression it was alive.’” thestrongdelusion.com...

The UFO phenomena are manifestations of living beings that are here to deceive mankind. They appear in their UFO form because they wish to change our perception of reality. That they are alive rather than mechanical is not our only conclusion.

The thousands of contacts with the entities indicate that they are liars and put-on artists. ~ John Keel

They are inveterate liars and deceivers, and delight in bamboozling and misleading mankind with all manner of nonsense. ~ Gordon Creighton

“They are messengers of deception” ~ Jacques Vallee

Why the desire to change our beliefs? These aliens had a clear teaching agenda. But why was it so important for these aliens to change our traditional spiritual beliefs? We do know that the so-called space brothers have established a pattern of telling us things that have been proven to be demonstrably false. One should then ask, ‘Should they be trusted either?’ After all, if they have lied, should they not be treated as liars?”


Watch the Unholy Communion video if you have time.

It completely tipped the scales for me personally.


'ET's' are extremely skilled at masquerading as "aliens" which is the reason behind all of the deception.

“Alien abduction” experiences have been occurring for centuries; the only difference is that those who experienced them in the past usually recognized them as being something evil from a demonic force. It is only in modern times that large numbers of people in Christian countries have began to refer to the atypical “alien abduction” as something that is not demonic. "

"I think that the experiences are so similar that one can conclude that they are in reality one and the same."

Hi! the simple reason why they can not say, yeah we can build these ships, is simple.

When they unleash a million UFO`s (military drones) upon the world, to destroy us,

we will not unite in a new world order, to fight our common enemy of humanity -IF- we know that they belong to any human government(alitet)

Compartmentalization. Government loves it. You only met those that build rockets.

For every negative comment you posted there can be positive comments by reputible people as well.
Good Aliens or Bad Aliens.
Good humans or Bad HUMANS.

Why would there not be good and bad in all realities, planes, dimensions?

Let's work on true Disclosure and go from there.

'Disclosure' is nothing more than a Psy-Op...

• Research by Dr. Roger Leir, Jacques Vallee, LA Marzulli, Joe Jordan, etc. is irrefutable and shows that deception is in fact taking place and solid proof is being covered up.

• Because of the "gubmints" involvement in the ET agenda, direct admission from them will NEVER happen.

• Aliens have already made themselves known to thousands of abductees who have been kidnapped, molested, and surgically implanted.

originally posted by: one4all
As far as Disclosure goes that term and its focus are now being used in a suppressionist manner to keep people thinking nothing has been found or has been made available to them,it is a Psy-Op.

You see the reality and truth is that Disclosure is only possible if there is a secret being kept, this is not about any secrets being kept because all of the data Humanity needs is out there and has been for 1000s of years recorded everywhere, this is about SUPPRESSION and MANIPULATION.

Simply using the word Disclosure now facilitates the SUPPRESSORS by drawing attention away from them,by making everyone chase shadows and their own tails,while TPTB try to strain everything they can off of the internet to stay ahead of the curve of the general population.

originally posted by: one4all
Simply using the word Disclosure now faccillitates the SUPPRESSORS by drawing attention away from them,by making everyone chase shadows and their own tails,while TPTB try to strain everything they can off of the internet to stay ahead of the curve of the general population.

Lets start asking when the SUPPRESSION will stop so we can target the right catalysts behind the scenes.

Lets accept that the information has always been out there and focus on keeping the data moving from site to site so it cannot be erased,but lets get these things OFF-LINE and reproduced in Hard Copy.Books are being intentionally and subversively destroyed in an organised manner,it is not simply technology evolving,once the books are gone then it is simple to black out the internet and throw Humanity into a dark well of ignorance overnight...

originally posted by: LukeCahill
UFOs are undoubtly real. The fact that so many people get to observe it zooming away or landing or whatever. Has it ever occured to any of you why the government try so hard to cover up alien existence? Its simple really. You see Aliens don't ride in UFOs we now observe. In fact these UFOs are man-made.

Nope. Humanity simply cannot construct the kinds of objects people have been describing for decades now. I happen to be pretty up-to-date on aviation technology and concepts -- my profession requires me to be -- and am familiar with the history and evolution of flight, and to suggest that the UFO feats/performances that so many people have observed is the product of human engineering is, quite honestly, not even remotely plausible. The world would be a much different place, frankly, if we had the technology to even convincingly hoax some of it. So this "UFOs are man-made" theory makes sense only if you ignore what many tens of thousands of credible people have said. Many of them with quite a bit to lose by coming forward. Sometimes with radar confirmation. Multiple, independent witnesses. Sightings at close range, i.e., no real chance of misperception....

Ignoring or dismissing the volume of accumulated information might be comforting to a significant percentage of individuals -- heck, we can see right here in these very forums the intellectual contortions people will go through in order to maintain their worldview status quo -- but covering our eyes and ears to it all is almost surely not wise if we consider the broader, long-term context.

posted on Aug, 31 2015 @ 12:16 PM
link
This is a great read,the people advising to read closely the research by stanton friedman & jacque vallee is really the only way to start on this UFO topic, the waters have become so murky its almost impossible to know where to start, those 2 guys are the gold standard...

originally posted by: swanne
a reply to: LukeCahill 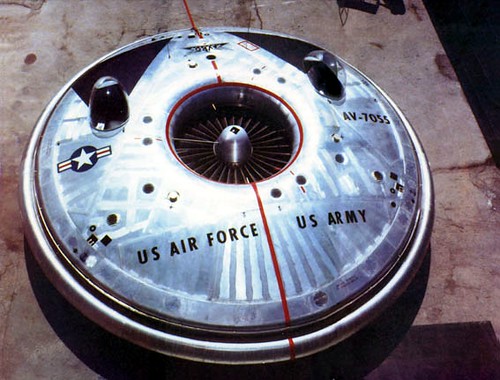 it is nothing more than an 18 feet wide disc with a propeller at the center - right between the two cockpits. The project was abandoned in the sixties because the whole design is flawed - the propeller is not powerful enough for the whole craft (not to mention lack of space for fuel); and the saucer design is just stupid - it provides for highly unstable flights, the cause being that the body of the craft is wrapping the one propeller (instead of several propellers wrapping the craft) and pushing on it from variable directions depending on load weight or atmospheric pressure variations.

the US did attempt to build "flying saucers".

The Avrocar was an invention of British Designer John Frost.

Then why do the US government have a Area 51 to store secret weapons that are only used in important and dire situations?


Not so secret if YOU know about them

originally posted by: NewzNose
a reply to: DJW001

Compartmentalization. Government loves it. You only met those that build rockets.

Of course, anything to explain why everyone who is in a position to actually know something about what you're interested in doesn't really know.