Ok so I got this weird odd leather bound bottle. The back story of how I obtained it. Back in the late 80's i was working for a sub contractor and he owed me back pay and was not able to pay me in cash. he invited me to his basement and garage to look at stuff to barter for trade for the wages he owed me. I got a whole lot of neat stuff, like a million old stamps in a cardboard box which i sold for a hefty profit, some tools and this thing. When i asked him about it he delighted to get rid of it. He claimed it brought him nothing but bad luck. At the time I was into the occult and thought the item was cool enough so i took it as part of the barter.

Moving on I kept it for years never having any bad mojo or anything? Took it to antique shop every now and again never really was given any input to what it really was.

As time passed on and the Internet became more available I came across the story of Juan Ponce de León and how he was searching for the fountain of youth in Florida.

The legend became particularly prominent in the 16th century, when it became attached to the Spanish explorer Juan Ponce de León, first Governor of Puerto Rico. According to an apocryphal combination of New World and Eurasian elements, Ponce de León was searching for the Fountain of Youth when he traveled to what is now Florida in 1513.

For more on this story here is the wiki.

So I ask you ATS is this the vessel in which Juan Ponce de León hoped to capture the all enlightening fluid of the fountain of youth?

Look at the relief (picture) in the 4th photo I posted. Is that indeed Juan Ponce de León?

It looks like an opium pipe. I believe that opium was used alot back then and not just in China. That would be my guess. Try looking up old opium pipes and see if you can find something like it.

It's not a pipe, lol 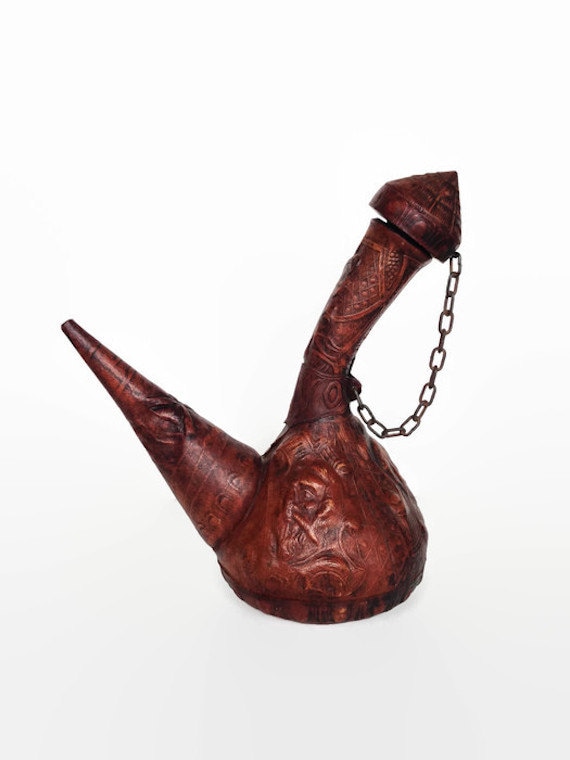 Having lived in Spain for many years previously I can say for a fact that similar vessels are used even today. It is hard to tell the size though, hence the gunpowder suggestion.
edit on 12-5-2015 by Jonjonj because: (no reason given)

posted on May, 12 2015 @ 10:21 PM
link
a reply to: MianeyeWow that is so similar, there are marks where something was fastened to the lid and the bottle. Still though i am more interested in the markings and what they mean even if it is just a whine decanter, which i am almost sure it is.
Thanks!

Having lived in Spain for many years previously I can say for a fact that similar vessels are used even today. It is hard to tell the size though, hence the gunpowder suggestion.

I would guess then that it could have been used on a ship. Suspended and easily tilted.

Perhapse something used in the distilling process to get the oils.