posted on Nov, 7 2014 @ 01:29 PM
link
NASA has begun testing of the Adaptive Compliant Trailing Edge (ACTE). The program would lead to the replacement of moving flap assemblies, and rigid control surfaces with morphing surfaces designed to make commercial aircraft quieter and more efficient. The Armstrong Flight Research Center has replaced the flaps of a Gulfstream III with flexible surfaces designed by FlexSys of Michigan. The tests will determine if they are viable for efficiency improvements and noise control during takeoff and landing. The system is currently locked at a specific setting, but as testing goes on they will be flown at various settings to determine if the system can withstand a real flight environment.

According to the AFRL, this system can easily be refit onto older aircraft or integrated into new aircraft. The first flight went as planned, and validated several elements of the system.

NASA has kicked off a flight test campaign to evaluate wing surfaces that can change shape in-flight. The Adaptive Compliant Trailing Edge (ACTE) joint effort between NASA and the US Air Force Research Laboratory (AFRL) hopes to bring a step closer the day when rigid control surfaces can be replaced by smoothly morphing surfaces, which would more closely mimic bird flight and promise to make future airliners quieter and more fuel efficient.

The flaps, designed and built by FlexSys of Ann Arbor, Michigan, were locked at a specified setting during the initial ACTE flight, but different flap settings will be employed on subsequent flights to collect a variety of data demonstrating the capability of the flexible wings to withstand a real flight environment

Cool stuff - I've been expecting something like this for a little while now; glad to see it coming to fruition.

I'd like to take some time looking into the engineering behind them - I'm curious how they balance flexibility and control.

posted on Nov, 7 2014 @ 02:12 PM
link
I had no idea that the control surfaces on an aircraft generated so much noise during take off and landing. I always enjoy looking out the window during TO/landing and have noticed that the wing flaps have large gaps between them and the wing so I suppose that would be kind of like having the window down an inch while on the interstate. LOUD

That's where most of the noise comes from. The air is turbulent over the flaps when it gets into those gaps. The flaps are responsible for a large part of the noise on take off and landing.

This is the wing: 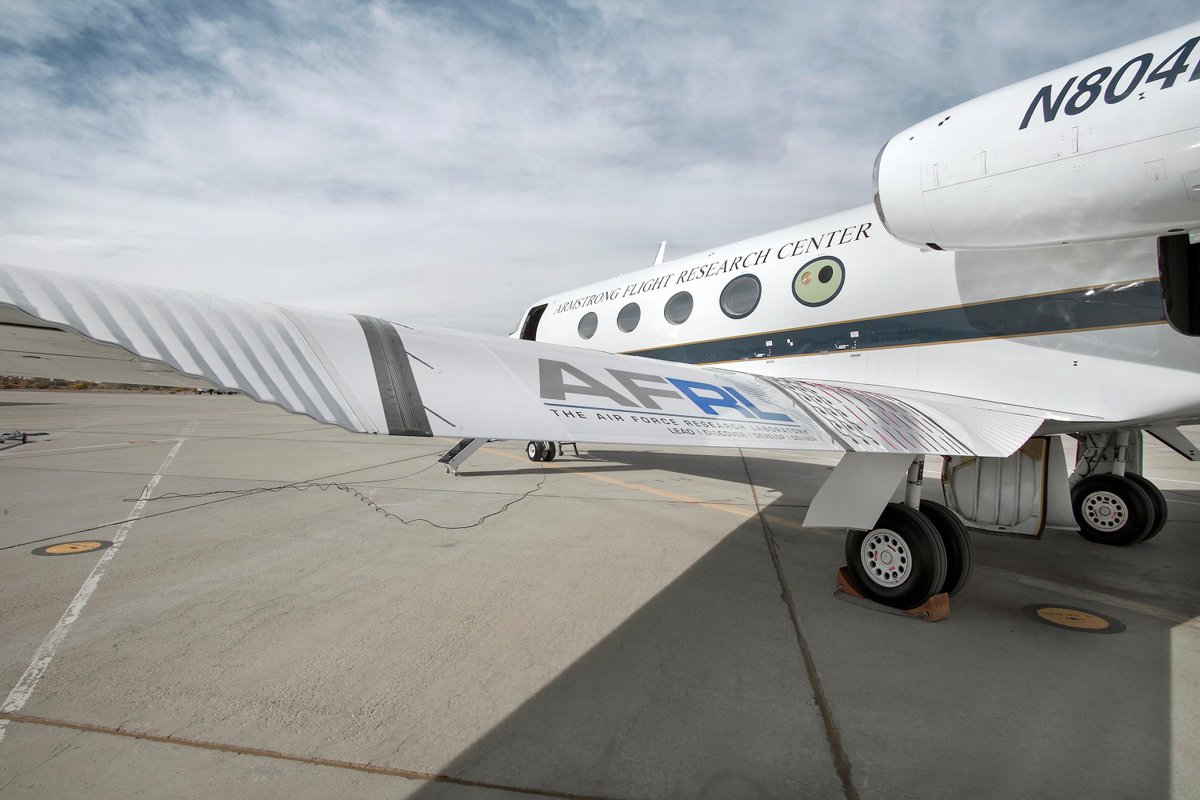 Hm, looks great, S&F, flexible wings would be a revolution in aeronautics!

Interestingly an EF-111 was flying in the mid 1980s with what was know as a Mission Adaptive Wing that would change shape depending on the portion of flight it was in. More curve for slow flight like take off and landing, almost super critical for high speed flight, and between the two for cruise.

Alot of stuff going around in the 80s are now getting re-visited... How quickly does mankind forget... At least, we re-discover.

Or it goes from one world to the other. Apparently the MAW was scary effective so it apparently went dark for awhile, and now is coming into the light again, and being allowed to play with everyone.

Thanks for posting the test video! I was looking for it.

posted on Nov, 7 2014 @ 04:04 PM
link
Very cool stuff. Here's a little more background on the variable geometry wing systems. I was looking for what kind of material the skins would be made from in order to be reshaped without losing integrity. While doing that I found a couple other pieces that put a good time frame on this research, and who's been involved.

DARPA began a three-phase program in January 2003 to design, build and control active, variable-geometry wing structures that can change substantially in flight....

One promising material for flexible skins is reinforced shape memory polymer (SMP). SMPs consist of "multiphase" thermoset polymer networks that can be elongated up to 200 percent into a new shape when subjected to heat. If restrained while cooling, it retains the elongated shape. When reheated above a specific, tailorable “trigger temperature,” the material relaxes to its original shape, due to the elastic energy stored during the temporary deformation....

Currently working on DARPA’s MAS project as a partner with Lockheed Martin, CRG has developed a reinforced SMP wing skin that can soften within seconds of heating thanks to small, stretchy electrode heaters embedded within the carbon fiber laminate. The heated, softened skin moves in concert with the underlying substructure joint as it morphs to the desired position and shape. Once cooled in the new, stretched configuration, the polymer “rigidizes” in the new shape. Havens reports that this SMP, used in a wing designed to morph in chord (that is, elongating the distance between leading edge and trailing edge) weighs less than DARPA’s baseline wing design and recent wind tunnel tests have shown that it can deliver 80 percent increased lift. With an SMP-based gel coat, the wing maintains a smooth aerodynamic surface at strains up to 100 percent.

Flexsys has come up with something very cool. To be fair to other companies, though (the usual suspects), this research has been going on for quite some time. Skunkworks and friends gets to have all the fun.

posted on Nov, 7 2014 @ 10:10 PM
link
Newbie here,joined primarily for this forum to learn and share..Adaptive wing sections indeed are not a new thing as the idea goes all the way back to Wing Warping used by the Wrights and Bleriot in the early 1900,s.The invention soon died out as much easier control surfaces came to fruition with ailerons,elevators etc and the effect of the warping led to unnatural flight characteristics.
With these newer tech components in materials I wonder what the long term effects on the structures will be with fatigue life and repairability..

During the flight, the pilots commented that the airplane's handling qualities with the ACTE flaps installed were the same as those of the standard G-III. I think this speaks well of the ACTE design that it can be seamlessly (pun intended) integrated as a retrofit to a stock airplane as easily as incorporating it into an entirely new airframe.

Data will be collected on various flap angles over the course of a series of additional flights. If all goes well, this could be a technology that sees wide use in future civil and military aircraft, just as others (winglets, supercritical airfoils, digital-fly-by-wire, etc.) have done before.

ACTE is quite a bit more sophisticated that the Mission Adaptive Wing (MAW) technology demonstrated on the NF-111A in the 1980s.

It should be after all this time. I just like to point out that the "new" technology was flying many years ago in a different form.

Ah, I read about this technology back in the nineties, and I thought, yup, next level. Morphing fighter jets that can fold in it's wings or double its lift surface using temperature and electrical impulses to make parts of the wing material expand reliably and predictably to allow for wings to be reshaped in flight. Cool thing, could make for some mint designs. Been a while since the Concorde was deprecated, nobody ever filled the gap. What are they waiting for? This?

Quiet boom technology to mature. Right now they would still have to go subsonic the first and last 250 miles.

Couldn't they just go higher, let's say they used the power to lift the winged bus 100 000 feet into the stratosphere, and then tip the nose down for the dive, reshape, and fire the thrusters and fall back to Earth at an incline like a fiery pro flying at massive speeds, allowing you to fly to any destination in the world within the hour, can't imagine the jet lag though. But the thing is, comfort was not the big thing with Concorde, but it was fast, and allowed for crossing the Atlantic in no-time, you could get up in the morning, take a plane to New York and be back for dinner.

Use most of the power to get high up instead, there has to be a way, then gravity will do the rest, a controlled dive from the edge of space over Europe to New York in less than an hour. A mutable body would come in handy I suppose.

They usually consider a 1 psi boom the limit for causing people to feel discomfort. At 80,000 the sonic boom from an SR-71, which has a planform that reduced the boom, was measured at 0.9 psi.