Manhunt for a Cop-Hating Pennsylvania ‘Survivalist’

originally posted by: PraetorianAZ
Was reading about this yesterday pretty interesting they found his car with all the evidence they need open and close the case against him. Which either means he left it there on purpose to throw them off. Because he already had a different ID and vehicle. Or he’s a complete idiot.

I mean who goes through the trouble of stalking and sniping your prey then leaving all the evidence behind to prove it was you??? It doesn’t make sense. If he was smart about it he would of shot then disappeared and nobody would of known who it was.

My guess is regardless of what actually happens to him the media will say we killed him. They cant let stories out about cops being killed and the killer getting away. Maybe it was Christopher Dorner and they know it so there trying to cover it up. Blame it on some white guy to keep everybody thinking Christopher is dead.

You know they really never found Dorner's body. NEVER. It was some BS lie that they "burned him out" and like Hitler, none of us saw the body. I remember the first news reports that said VEHEMENTLY that it was NOT Dormer's body they pulled out, but one he "left" behind.

abcnews.go.com...
Jeremiah Hornbaker, who's known Frein through the film industry for nearly a decade, told ABC News that Frein was often hired as a military and weapons expert in films. Frein played the part of a German soldier in the 2007 short film, "Lustig," according to its IMDb page. ... Frein worked mostly as a "background guy" who helped ensure historical accuracy of the films, he said.

My guess he is either in the military currently or is ex-military. Probably some special forces type.

www.neagle.com...
Eric Matthew Frein is a member of a military simulation unit which assumes the role of Cold War soldiers in the Eastern European Bloc 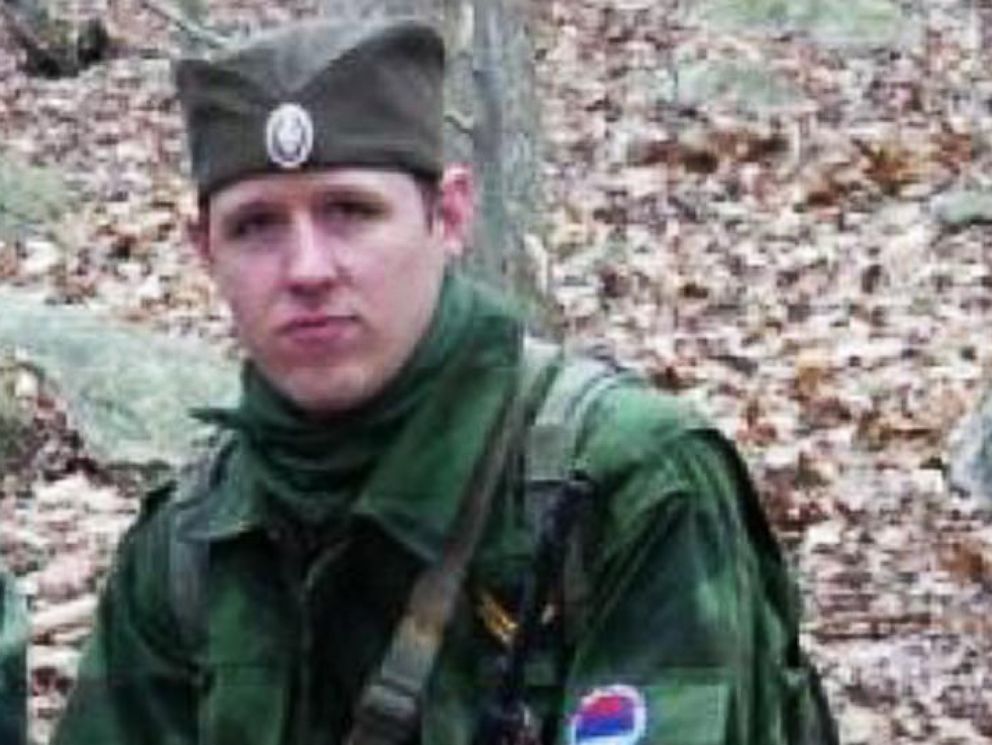 In his beef with police, I doubt it was Frein who drew first blood. Anyway, you're probably dealing with an expert in guerrilla warfare, with a man who's the best... with a gun, with knives, with his bare hands. A man who's been trained to ignore pain, ignore weather...to live off the land, to eat things that would make a billy goat puke. At this point, there's only one man that can bring him in:


My guess he is either in the military currently or is ex-military. Probably some special forces type.

Sounded to me like he was living in mommy and daddy's basement.

Here's a decent compilation of information on the subject. Link

posted on Sep, 18 2014 @ 05:03 AM
link
I find the foreign embassy stuff interesting. I wonder if he identifies himself as a misunderstood "hero", sort of like Edward Snowden and thats why he trying to learn about States he thinks will take him in.

I realize it is very suspicious for this guy's ID and SS card to be found in the jeep but I have personal experience being in a sinking car in a swamp and let me say that as soon as that water starts to come into the vehicle you get out fast. I am surprised he had the time to take his guns out.
I also think he will evade for longer than 48 hours.
Does anyone have the coordinates of the area the Jeep was found in?

Oh please, give me a break. The guy shot and killed one cop, and critically injured another. This isn't about labeling or victimizing preppers, it's about catching a murderer. End of story.

posted on Sep, 18 2014 @ 10:11 AM
link
a reply to: georgezip
Honest question. If you were driving along, and went into the water, would your ID's really be left in the car? Where do you keep your ID's? Personally, on the rare times I carry ID, they are in my wallet, in my back pocket. As does every male I know. Only a few females I know carry a purse, and that is where their ID's are obviously.

My identification, such as it is, is always the right thigh pocket of my combat trousers. I never leave the house without my trousers, and I only change into my fresh trousers in the morning, once I have already transferred the contents of each pocket, to the corresponding pocket on the fresh pair. All my trousers are black combats, I own no other variety. That makes the entire process of carriage of my effects much less of a hassle than having to disperse them around a plethora of different configurations depending on which pair of trousers I happen to pull out of a drawer.

posted on Sep, 18 2014 @ 11:22 AM
link
a reply to: TrueBrit
Exactly, most people know that ID is important, and keep it on their person to protect against things like identity theft. That's why I asked, maybe it is different in other parts of the country. Every single time in my life, I have seen a male asked to produce ID, out came the wallet from the pocket. Even guys that carried briefcases. My experience is totally limited to the east coast though, NY, CT, NJ, PA, MASS, ME, DE. NH, and FL .Also east coast canada a few provinces as well. I have never been off the east coast except FL, I don't think that is technically east coast.
edit on Thu, 18 Sep 2014 11:25:07 -0500 by TKDRL because: (no reason given)

Anyway, I do think it's very convenient that he left so much PII AND two rifle casings in a half submerged jeep. He even left his hunting license! How's he supposed to hunt for food?!?! Maybe this is his way of showing that he is no longer under the authority of the US govt.

Lastly, when I saw a headline that stated he was into role playing I thought they were talking about Dungeons and Dragons! Reenacter and role playing are a bit different.

So, seems the news has convicted this guy and I seriously doubt he stands before a judge. Latest I read was that the State Troopers were going after him like a nest of hornets.
edit on 18-9-2014 by Feltrick because: (no reason given)

posted on Sep, 18 2014 @ 12:26 PM
link
I live barely 8 miles from the Barracks. Hourly there are helicopters flying overhead state police scouring our woods
and in and out of every community we have here in Pike Co. and Monroe Co.
They WILL catch this nut case! Every school is in lock down also hospitals. I am even afraid to walk my dog around my yard every update I see for my area says he is still in our area and heavily armed there are frequent gun shots happening at random times. They want us to lock our doors and windows and stay inside I am tired and really haven't slept with all the commotion happening around here. I pray they catch him soon and end this nightmare.....and for the families involved my prayers go out to them.

The role playing your talking about is he frequently dressed up as a soldier from other countries he belonged
to a group who also did the same ...playing out war scenarios and involved in the military re-enactment community.

posted on Sep, 18 2014 @ 12:51 PM
link
I just hope that when they find him, they will have restraint with the triggers. Finding out what makes people flip out this way is important to keeping it from happening more. I just think the cops will be thinking of retribution as well as capture. (and in this case, it's hard to blame them)

And John Phoenix, generalizing all police because of your tiny little view of the world is ignorant beyond belief. There are bad cops, good cops, red cops, blue cops. Dr Suess says, "don't be that guy".

Ironic he's a prepper yet he didn't have the foresight to NOT leave personal identification in his abandoned truck.
edit on 18-9-2014 by PatriotGames2 because: (no reason given)

originally posted by: starlitestarbrite
I live barely 8 miles from the Barracks. .... there are frequent gun shots happening at random times.

Can you re-confirm that? Doesn't sound right.

Anyway there is a big problem in the timeline. They are saying the shooting was over in minutes, with just four shots being fired in total, but this source has it going on far longer:

www.pennlive.com...
10:51 p.m. — Paramedics are first called to the state police barracks for a shooting. "There are two victims at this time," a dispatcher said.

I also think it curious that Frein did everything to leave a trail of clues to follow. He leaves the four expended cartridges at the scene, then dumps his vehicle where it will soon be spotted, with ID and more expended shells to match the first ones, among other incriminating evidence. And then they find more expended shells that matches the others at his domicile, along with the sniper manual. I get the feeling someone is "painting a picture" for us.

I thought I was the only one. I wear Rothco BDU's and Rothco BDU shorts, same pocket configuration on both, ID is kept in my front right pocket in a money clip, cigarettes in the right thigh, cell phone front left, etc. Every morning I wake up, put the same things in the same pocket of a new pair, and always know where EVERYTHING is. Efficiency.

Oh please, give me a break. The guy shot and killed one cop, and critically injured another. This isn't about labeling or victimizing preppers, it's about catching a murderer. End of story.

I would be willing to bet some cash on that. Why else would they publish his picture in uniform, already have a bio, and call him a survivalist while leaving his ID in the car after the crime? This flag smells so false it has a label of islam on it. I don't believe he left his ID in the car anymore than Timothy McVeigh had expired tags on his car and was pulled over after leaving the scene of the crime. There is more to that just as there is more to this.

You're missing the point: 1 person died, another is critical. They're posting pictures of him in military re-enactment gear to relay the level of his aptitude to both survive and combat. Nothing more, nothing less.

You're missing the point: 1 person died, another is critical. They're posting pictures of him in military re-enactment gear to relay the level of his aptitude to both survive and combat. Nothing more, nothing less.

So you don't find it odd that a man with an aptitude to survive and combat; just leaves all his identification and evidence pointing directly to him? This stinks as bad as Sandy Hook with all the purposeful disconnects.

You are missing what everybody is saying. Its just a little to convenient that he left all his stuff behind. Like the passport that escaped the twin towers. Or the burglar who dropped his wallet at the crime scene. Snipers are trained to pick up there brass that way [people tracking you don’t know were to start from. If they know the location you took the shots from then they know were to start tracking. How do I know this you ask??? I have the same sniper training book this guy does. You don’t give up your firing location by leaving brass behind because that is the first point of reference they will track you from. Now they just follow the boot prints or scrapes on the ground or scent you left with dogs. If they don’t know your firing location its a lot harder to track your movements at least in the beginning. Thats sniping 101.