Is the earth round or flat a nasa video seems to show flat, you decide? 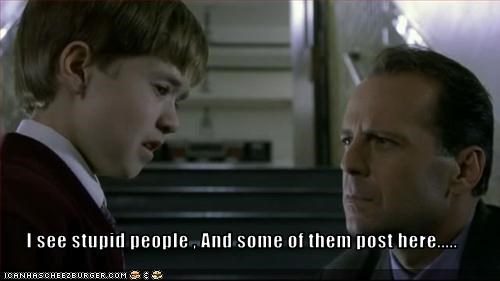 I'm going to go sit in the corner now while I rock & sob uncontrollably over the current Idiocracy transformation this planet is undergoing.

Oh come on now, no need to cry!

Two of us used the correct term to describe the shape of the planet, and most people agree that the basic shape is round, or some sort of spherical!

It could be worse!

I always tried to explain to flat-earthers how water droplets are; That's exactly how the earth is---in a sense. We're a water droplet in vast space of other water droplets--if that makes any sense at all.

originally posted by: Fylgje
IDK....I want to be different and say that the earth is square. Forget what science says. SQUARE ERF RULZ!!

I always tried to explain to flat-earthers how water droplets are; That's exactly how the earth is---in a sense. We're a water droplet in vast space of other water droplets--if that makes any sense at all.

No, no it does not. The square thing analogy you mentioned first seems much more believable.

posted on Jun, 30 2014 @ 01:24 PM
link
I suppose my questions are simple... the earth was agreed to be spherical long before NASA... what would be the point and gains be in trying to convince us otherwise...and why has there been no evidence or proof supporting the edge of this flat earth?
Surely in this day and age with the WWW we would of seen massive proof by now.

originally posted by: Jefferton
How do flat-earthers still exist?

Of all the dumb fringe groups, they are the worst.


Sometimes you run across posts on ATS that make you LOL. I am surprised people that believe this have figured out how to use a computer and post a thread about it. To you naysayers saying you've been in an airplane or a high place where you've actually seen the curvature... bah... ever heard of hills??! Huh?

Besides, if our world was a sphere, how-in-the-heck would the turtle holding us up keep the Earth on it's shell? We already get Earthquakes when Earth slips... imagine the chaos if we were rolling around all the time with the poor turtle maneuvering to keep us centered.

originally posted by: Baddogma
And praise the turtle...

Gan is the man!

posted on Jun, 30 2014 @ 02:03 PM
link
They are using some form of wide angle lens on the balloon cam which is causing the curvature to look less curvy?

posted on Jun, 30 2014 @ 02:04 PM
link
There should be a new forum for dickheads called dickheads.
This thread would be perfect there.

Did get a good chuckle from the responses though

originally posted by: OpenEars123
There should be a new forum for dickheads called dickheads.
This thread would be perfect there.

I would dwell there with contentment.

posted on Jun, 30 2014 @ 02:13 PM
link
I read recently that flat-earth was a myth and that scholars have been able to tell the shape and even circumference of the Earth since civilisation began. Supposedly, flat-earth was a fairly recent idea spread by Protestants to discredit Catholics. Or something to that effect.

posted on Jun, 30 2014 @ 02:30 PM
link
It's shocking that people are gladly doubting mainstream science, "NASA tells lies"....but are utterly ready and happy to swallow the biggest, absurd nonsense they find on Youtube and don't have a problem with it... mind...blown...

You don't need to fly into space to know the Earth is round, there are tons and tons of ways to determine this without simply stepping back and looking at it.

Ever witness the sun never setting far north? That means you are either on top of a spinning sphere, or if the Earth is flat, in the middle of a spinning disk. If you were in the middle of a spinning disk, then locations far away from that location on either side would be double the distance from each other, and it would be impossible to move between those locations quickly. But since the Earth is round, you can quickly move between those two points by stepping a few steps.

I drew a picture to illustrate this point, if you are at location "A" in the middle of a spinning disk, the distance between points "B" and "C" will be great. But they aren't, on a flat disk you would need to travel either straight across the disk, or somehow wander outside the disk in some sort of aether environment before coming back to the other side, and even longer distance.

Another thing to think about, if the Earth truly was flat, every single airline pilot on the face of the earth would have to be involved in the coverup. Not because he'd see a flat Earth, but because travel distances would be far far different than what they currently are (because of the reason illustrated with the MSPaint funny face looking picture) and the pilot would easily know this. Most passengers if they put the effort in would also easily be able to tell the earth is a globe. You can't fly west from Europe to America, then west again to Asia, then from Asia west to Europe without the Earth being round. Unless you are going around the edge of a disk, but in that case, you wouldn't be able to go south and turn up at the north pole again, which you do. Finally, a voice or reason and intelligence among many posts from naysayers, nardiwelles, and flat-earth-deniers (now we know who you are!). Look, if the earth were round then lots of people on this board would fall off, along with their stuff and their pompousness. They'd just fall off. I know this because where I am it's flat. I can walk for miles or ride in a machine for hundreds of miles and it, gentlemen and ladies, is flat as a pancake. Sure, mountains and things are around, but they stand straight up, not all cockeyed. Round? Give me a break. All your posters may have the OP second-guessing, but not us scientists and thinkers who know the truth. Star and flag for an expose worth its name.

And see, the OP's name is PlanetXiscoming, so we know he knows of what he speaks and has his feet on the ground (flat on the ground, where he can walk without tipping to the side, Jeez, what folly to think otherwise).

originally posted by: mysterioustranger
Maybe I missed it...bu the OP hasnt been back in 3 pages of replies. We know why..............


How do flat-earthers still exist?
Of all the dumb fringe groups, they are the worst.

TBH I've read a few of the flat earthers forums and some of their ideas and theories make me think that most of them know full well that the earth is round but they just like to take the p*ss
edit on 30/6/2014 by Argyll because: (no reason given)

originally posted by: Jefferton
How do flat-earthers still exist?

Thomas Dolby is responsible for the Society's existence now

Oh, and here's their FAQ - and they're serious!