NEW YORK (AP) — The secret U.S. government memo outlining the justification for the use of drones to kill American terror suspects abroad was released by court order Monday, yielding the most detailed, inside look yet at the legal underpinnings of the Obama administration's program of "targeted killings."

The 41-page memo — whose contents had previously been summarized and released piecemeal — was heavily redacted for national security reasons, with several entire pages and other passages whited out.

Washington argues that they are allowed to kill US citizens overseas if they are considered a terrorist. What considers you to be a terrorist? Well the obvious is that you are apart of a terror group, like Al Qaeda. The legal justification and power to kill abroad was born after 9/11, big surprise.

A US citizen accused of being a terrorist can and will be killed if they are considered too dangerous to capture posing a life risk for US authorities. So without a court of peers you will be sentenced to death if the gov't deems it so because it's just easier that way.

If we had a gov't run by angels I wouldn't be so concerned because lets face it, 1 less terrorist is a good thing, but we don't have angels running our country so I'm very concerned by the powers they continue to grant themselves, especially if its on the heels of 9/11.

9/11, a tragedy that could have been prevented but wasn't. Problem. Reaction. Solution.

posted on Jun, 23 2014 @ 06:43 PM
link
Swills, any human behavior can be justified by the subconscious mind which is your automatic reactive defense system. It protects you from real AND imagined threats or threats you create to get what you want, now imagine a collective of millions of people who link up their subconscious minds and create weapons for it to use(drones) to justifiably protect itself.

So the question then is why are these people really a threat? What are they actually threatening? Are they so much of a threat they really need to be vaporized or are they just being set up so live testing can be done to enhance a system platform that is planned to be used in its country of origin, on its own people when the time comes.

How many would march on the White House with predator drones flying around in the sky............

I can see why they didn't want to make that public.

Because the memo makes it clear that if you reject the exceptions outlined, the actions would be murder or manslaughter. In fact, it even notes that "unlawful killing" is just a term of art, and is meant to denote murder.

So how do they justify the killing of all the innocent families these things have taken out?

That then leads to the question, isn't using these things not a potential trigger for creating more terrorists?

That then leads to the question, isn't using these things not a potential trigger for creating more terrorists?

Great marketing there, it should've been

Maybe the current US administration should have been killing ISIS instead of American citizens.


That then leads to the question, isn't using these things not a potential trigger for creating more terrorists?

Well here is the problem with that.

Before drones 'terrorists' were getting cruise missiled to death.

Terrorism will always EXIST as long as the WEST exists.

Since the WEST has that 'freedom of religion' doesn't have Sharia LAW.

They will always be around.

They will never stop until they have the entire globe.

Those NEOCONS in the middle east have global ambitions.
edit on 23-6-2014 by neo96 because: (no reason given)

posted on Jun, 23 2014 @ 07:11 PM
link
Doesnt matter how the hell they phrase it nothing justifies cold blooded murder.

The murduring corrupt bastards need to be held to account for their crimes. .. but nnnnooooo the idiot public will instead reelect the bastards ..

In any case, have these drone strikes been successful? If you were to ask most politicians/military leaders the answer is yes, but that doesn't make it so.

Let's forget about the strikes against US citizens for a second and focus on drone strikes in Pakistan. These attacks are usually based off of very loose evidence/intel. For the most part we do not have human intel on the ground to verify anything, before or after the strike. The strikes are hit and run, much like a gangster. What isn't resolved is who was killed, whether civilian or not, who was maimed, and what/whose property was destroyed.

All the innocent people who just happened to be in the wrong place at the wrong time are never compensated for their loss. No apologies are issued. The only thing you will hear is that in the news US drone strikes may have killed some bad guys. It well after the fact that we may learn of what really happened and who was killed.

So am I for drone strikes at all? At present, god no.

Do I believe these strikes only create more hatred for American/West and fuel terrorism? Hell yes.

Even Scarface refused to blow up a target because of women and children. Can't say the same for the US gov't.

posted on Jun, 23 2014 @ 07:19 PM
link
a reply to: Swills
So why didn't they use a drone strike on bin Laden? He isn't even an American citizen.
I can not abide by a government that finds reason to believe that American citizens don't deserve Constitutional protections just because the government has accused them of something.

But I agree, why hold back the obvious? They want to kill anyone they consider a terrorist, without due process of course.

They just ignore all the destruction theyve caused and the lives they've destroyed in the name of terrorist hunting.

Lets look at the first American killed via the drone strike. Okay, he was a legit Al Qaeda baddie, they describe him as a spiritual leader who was behind some attacks on Americans, but he's clearly not the cream of the terrorist crop.

But they killed him anyway and his 16 year old son.

Was his son also a terrorist? Guilty by relation?

Doesn't matter, it's all in the name of fighting the failed War On Terror!

Well the Military Industrial Complex is definitely all about killing.

All about continued fighting.

Definitely not about making peace.

Now there's a thought that has been bothering me for a LONG time now. It's not like terrorist have just crossed the Iraq border. They've been there for YEARS causing MUCH death and destruction. Now they are almost at a celebrity like status rolling around in brand new white shiny vehicles driving in line by the numbers YET no drone strikes. 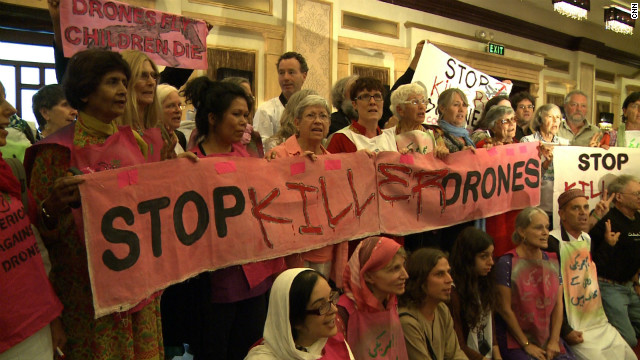 Good point. How many US states still endorse the death penalty (35 is the answer)? Nevermind that, in order to go onto Death Row one needs to be tried and convicted by a jury of his peers.

This is your federal government sanctioning or "legalizing" the ability to kill someone, simply because they "deem it necessary."

This is setting a VERY DANGEROUS PRECEDENT.

Your political views should not mater as far as being liberal, conservative or anything in between. Every single American should be concerned about this, and object to it.........LOUDLY.

This is just as bad, if not worse than the Patriot Act.

If you condone this type of behavior by our federal government, you are condoning that the federal government can, at any time, decide that you are a "threat", and therefore no longer enjoy your constitutional rights of due process.

This is setting the stage ladies and gentlemen. Has nothing to do with Dems. Vs. GOP.

This is The People Vs. The Government.

Stop and think before anyone goes on to a Dems. Vs. GOP rant: Since 9/11 until now we've gone from Patriot Act to Government Assassinations of US citizens.....

Think about it. And stop squabbling about Left or Right.

Because while y'all are doing that.....what will be the next thing the US Government sanctions with a memo???

How many times has the gov't had the chance to take out OBL, and many other baddies?

Truth is, it's all BS. What we hear out of DC and from the MSM is mostly BS.

But we know this. These bastards have a plan, nothing just happens. It's by design.

posted on Jun, 23 2014 @ 08:06 PM
link
I don't know if anyone has said this yet but I was taken aback by the fact that they CAUGHT the Benghazi terrorist suspect and didn't kill him. But OBL has to be killed?

I mean these is no law that there pointing to for justification that we can kill this suspect and not kill this one. it is only hey we feel like killing this person. I mean our government faces no consequences. what's someone gonna do write a blog about it.

Many will tell you why OBL was killed, or made out to be killed that day.

The same man who was never officially charged with the crime of 9/11.