posted on May, 9 2014 @ 04:05 PM
link
Just came across this story and video on the internet.
A paranoid schizophrenic man locked himself in a bathroom with a knife and was threatening to harm himself, so his family called 911. Police officers showed up and gained entry to the bathroom, where the man refused to put down his knife. The man was repeatedly warned over several minutes to put the knife down and tased numerous times. Eventually he gets up and (either trips or lunges) towards the officer, still holding the knife. The officer then shoots the man and continues to shoot him after he had already fallen on the floor, for a total of 11 gunshots.

I'm curious as to what everyone thinks of this whole situation. While it was probably completely unnecessary to unload 11 bullets on a guy laying on the floor, the officers did spend several minutes telling the guy to put his knife down. I think to that end, they did show a certain amount of restraint, especially considering the man's significant mental illness and unpredictability, as opposed to simply shooting him on sight. Could things have gone differently? Maybe. But I think this shooting was justified... Just a bit over the top as far as ending the threat the man presented.

If you need your plumbing fixed, don't do it yourself - call a professional.

If you need your house painted, don't do it yourself - call a professional.

If you need to kill yourself, don't do it yourself - call a professional.

This is really sad all around. Mental illness is still so poorly understood, and is severely lacking resources to help those with mental illness. The article you linked said that the people first tried to call some sort of mental health services, who kept telling them to call 911. Those services' hands were probably tied both for liability reasons, as well as lack of resources to deal with this type of situation.

If they aren't already, law enforcement should be trained to handle mental illness differently than just 'some bad guy with a weapon'. These guys went in there in a very aggressive assertive fashion, which I am sure works well with most of the people they go up against, but that approach just doesn't seem appropriate for a paranoid schizophrenic.

posted on May, 9 2014 @ 04:36 PM
link
Would one shot not have been sufficient? Why empty his clip? I seriously doubt rapid-fire was necessary.
We tranquilize animals that pose a danger....why not call F&G? At least they stand a chance of surviving that way.
What's so sad to me is the LEO didn't even TRY to talk to the guy.
There's GOT to be a better way to deal with issues like this.

A cop might have got hurt from the knife, but I doubt one would have gotten killed if the three officers trained in basic hand to hand to hand take downs attempted to subdue this man.

...unexpected
(from the title) i assumed rush limbaugh was finally dealt with?


fwiw, i think the message is starting to becoming crystal clear when it comes to dealing with the gestapo law enforcement agencies these days

The shooting is justified. He tried many times to get the man to comply. The suspect got up and charged. Now that being said, I do think the officer fired excessively. But in a situation like that, it is hard to tell the fear and or panic going through the officers mind the minute he has to fire.

Either way the number of rounds does not matter and is not what killed this guy. It is his failure to drop his weapon and attempt to attack the officer that got him killed. We all know that there are many officers who would have fired the second that door cracked opened when they initially saw that he was armed. So they gave plenty of ample warning.

I do not care about this mans illness so as long as he knows the English language (drop the knife) and is not blind (man is pointing a gun at you). So stop the mental illness garbage (not the OP). If this man had gutted your son or daughter with this knife, would you then say, darn its okay because he was just ill?
Firepiston

posted on May, 9 2014 @ 05:08 PM
link
Something needs to be done to create a viable alternative when dealing with mentally unstable people. If the family hadn't called the cops then there is a possibility that a person would still be alive.

"yes he is in the bathroom with a knife I think he may kill himself- don't worry mam/sir sit tight police are on the way they will be sure he dies".

11 shots. Sorry but the police did everything wrong to lead up to that point. People can be talked down they did not even try. Tazers will make people angry. That is murder in my eyes.

Either way the number of rounds does not matter and is not what killed this guy. - See more at: www.abovetopsecret.com...

Really? 11 shots is very excessive...
That just shows this cop had no intention to shoot to incapacitate, but indeed shoot to kill
He still has a job to protect and serve the guy with the knife.

I still don't see why these officers could not have gone hands on with him while he was getting tased.
And for the "but he had a knife!!" response, oh well.
Part of being a cop, you might get hurt when you have to arrest, not kill, a man with a knife.

Would the average american citizen be able to get away with this shooting?
Why do we not hold cops to that standard?

If this man had gutted your son or daughter with this knife, would you then say, darn its okay because he was just ill? - See more at: www.abovetopsecret.com...

If this man didn't die he could of also cured cancer, aids, and created a food source that was cheap and nutrious and found in nature in abundance.
Same odds as the situation you put forward
edit on thFri, 09 May 2014 17:15:57 -0500America/Chicago520145780 by Sremmos80 because: (no reason given)

I was thinking the same thing.
Why not tazer him first, that should of subdued him.

posted on May, 9 2014 @ 06:44 PM
link
They cold have done many things to prevent the guy from dying...
A bathroom is a very small area, so it is claustrophobic to some
people I do not about schizophrenia people...

IMHO they should have tried to co-hurts the the guy out & just
talk to him...I would think giving orders would make things worse
& possibly add to more paranoia...

But what do I bloody know? Nothing.

posted on May, 9 2014 @ 07:14 PM
link
That taser might not have worked, but I bet a direct hit of pepper spray in the eyes would've made him drop that knife REAL quick..

The moral of the story is, threaten to kill someone including yourself, and we'll do it for you.

"Goons with probes inserted into their pleasure centers; wired up so when they kill someone, they get paroxysms of ecstasy. In essence, customized serial killers. Easy to kill, and they tote shotgun shells. It's like a little Christmas each time you blow a Grunt away!"
— Quake Manual 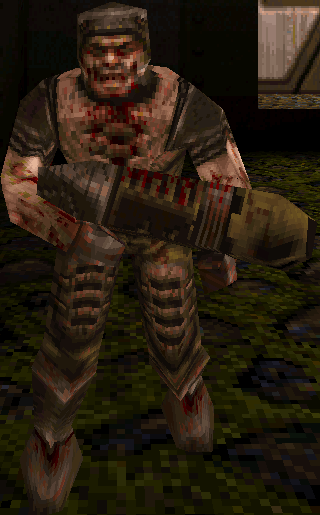 Jeez...the guy was only threatening himself. Let him cut himself and then bring in the medics. One pop to the leg would have been sufficient to drop him. That bozo cop needs to be sent to the unemployment line. Is there a reason that police are not allowed to use some sort of tranquilizer gun?